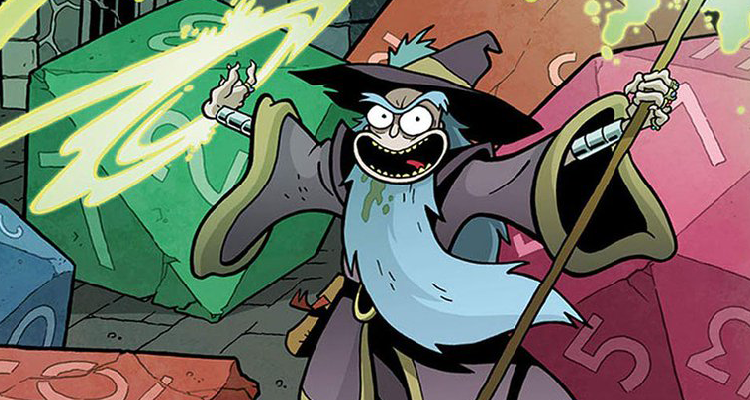 Learn the Basics of Dungeons and Dragons with Rick & Morty

Dungeons & Dragons has been the king of the hill for RPGs for quite a while now, thanks to notoriety and marketing. It continues to keep its dominant position by collaborations and joint projects with various other fictional universes (Intellectual Properties or IPs). Rick & Morty is certainly a widely known name, a western animated sitcom which has run for 4 seasons since 2013, and with a fifth season due to launch this year.

For fans of Rick & Morty who haven’t yet taken a peek at Dungeons & Dragons or any other RPGs out there, this can be a fun entry point. The book is a simplified guide to the game and teaches the basic rules and systems, without the bells and whistles. It does not have sections for creating characters or for any settings and uses some pre-generated characters and a pre-made dungeon for players to jump into.

The book is plastered with post-it style notes from Rick himself, giving his thoughts on how to play the game and how to enjoy it. Given the character and personality of Rick, this should be taken with a grain of salt, as his advice points towards certain types of gameplay and storytelling. It may be a mixed-enjoyment kind of read for someone with prior experience in RPGs, as many of the suggestions and pieces of advice by Rick can tend towards a bit of “murder-hobo munchkinism” (designed towards maximum combat efficiency without regard for story elements). The tongue-in-cheek tips for Game Masters or Dungeon Masters, as D&D puts it, do also make for laughs though.

As a whole, the Rick & Morty supplement is not a bad step into the game, but it is a little limited in scope. Not really a material I’d recommend to people already in the game, unless they are hardcore fans of Rick & Morty, as the actual text adds nothing to game content beyond the pre-generated characters and the custom dungeon. For those who are already fans of Rick & Morty and who want to take a look at D&D, this isn’t a terrible way to get into the game, though the Rick factor should be noted not to apply for all sorts of games and gaming groups.

You order the book via Amazon, Roll 20, Fantasy Grounds, Books-A-Million, or Steam.