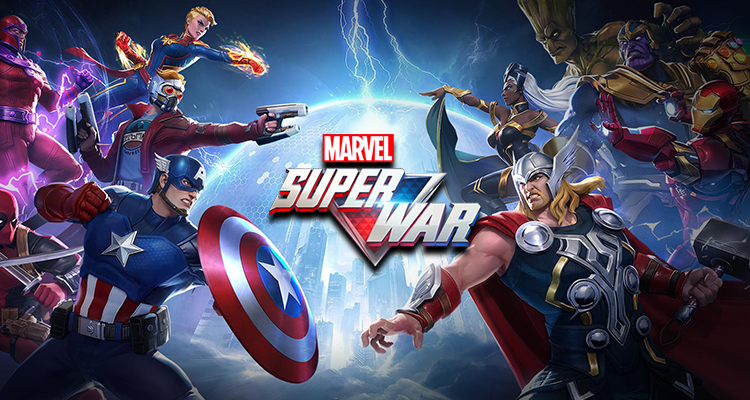 Marvel Super War is a Multiplayer Online Battle Arena(MOBA) by NetEase Games, pitting the heroes, and villains of Marvel against each other.

This Guide is meant for complete beginners to the genre, so I’ll be starting with defining what a MOBA is, a MOBA generally consists of 2 teams of 5 pitted against each other, seeing who can destroy the other team’s nexus first. In a typical MOBA, the map consists of 3 lanes and a jungle filled with beasts in between each of those lanes. Each lane has 3 towers to help protect the Nexus, and all towers in one lane must be destroyed before the Nexus can be attacked. To help speed up the match, the game will also spawn minions at regular intervals.

The MOBA genre has been around for quite a while now, and certain strategies have become the norm, such as classes and lanes. The classes players will take up in the early part of the game will usually determine what kind of role they will take up throughout the match.

There are 6 class types each character fits into, some will have a mix of two typings and others will have only one.

Fighters are the melee offensive characters in the game, Usually, their skills are geared towards dealing damage and taking damage. Playing as a fighter, you’ll usually be the first one in during a clash sometimes second right after the Tank, so target the enemy Marksman or Energy, and take out their artillery. Sometimes if given the right items they can also become a secondary tank. The position these guys usually get put in is either Solo-Top or Jungle due to their capability to handle themselves. (Captain America, Thor, Ant-Man)

Energy characters rely heavily on their skills whether its damage or crowd control, so proper skill management is a must for those that plan to use one of these guys. But because of their reliance on the skills, it also means they have lots of potential in changing the outcome of a fight with a press of a button. These guys are usually put in the mid-lane because of their versatility in battle. (Iron Man, Iceman, Storm)

Marksmen are the ranged physical attackers of the game, they generally have the highest Auto-attack DPS whether its through attack speed or through basic attack damage. Even though they have high potential later in a match, they lack durability. Marksmen are extremely fragile, which is why they are usually partnered with a Support or Tank to help keep them alive, and feed them kills. (Star-Lord, Angel, Hawkeye)

Supports, as their name suggests, are there to support the rest of the team. Their skills are geared towards helping their allies whether its through healing, providing shield, or crowd control to help them get kills. This makes them the perfect partners for the Marksmen since they have the lowest DPS average among the role types. (Mantis, Cloak & Dagger, Groot)

Tank is a very common term in a lot of games, their primary focus in the game is defense. Their skills are geared towards skills that buff their defense, with the occasional crowd control/damage skill so that the opponents cant ignore them. They are the first to jump in the middle of the opposing team and cause mayhem. Their usual position is either as a Bot-Lane(Support) or in the Top-Lane. (Hulk, Cull Obsidian, Heimdall)

Assassins, as their name suggests are swift killers. designed to kill before their opponents are even aware, their Skills are geared towards mobility and burst damage. Because of this, they make great gankers. They are best suited for the Jungle, and sometimes in the Mid-Lane, because of their ability to quickly close gaps and kill. (Black Widow, Beast, Quicksilver).

Now that we know what character types there are, we can now discuss the positions that each team generally consists of. There are 5 positions; Solo-Top, Mid-Lane, Bot-Lane, Support, and Jungle. 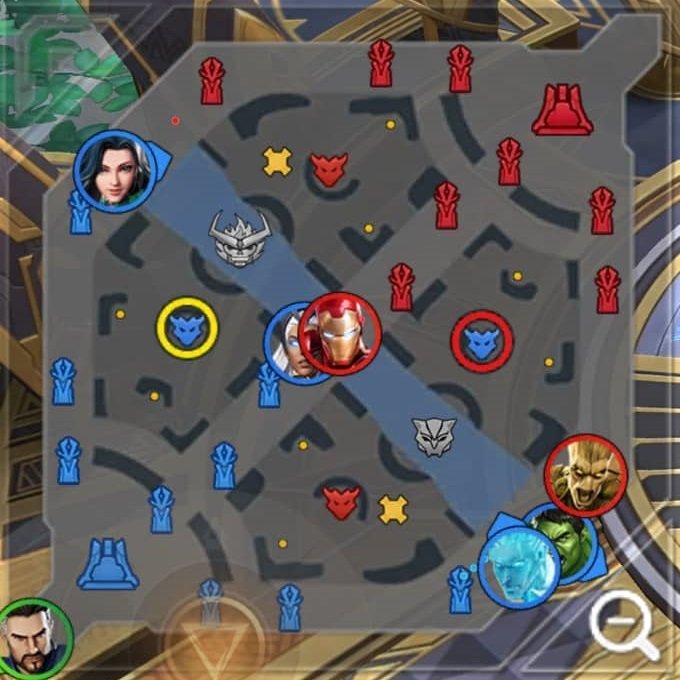 As it says this is found in the top lane of the map. Players who go here are usually far from the action, basically, they have their own little world, and focus on pushing their lanes. In this lane, because they’re usually on their own, they have to be able to handle themselves without any help, so they need to be capable of fighting it out in skirmishes. Generally, the ones that do well here are characters who can duke it out, or who can harass.

Mid-Lane is right smack dab in the middle of the map, this is also the place where the towers of the opposing teams are closest to each other. Tower hugging happens a lot here due to close proximity, so characters with good poke/harass abilities like Energy and some Assassins are best suited for this. Mid-Lane is also on average in the position that can help each of their allies because of how quickly they can arrive on the scene should a fight break out anywhere on the map. If you have the time, like when your lane opponent is healing or dead, check the map and roam to the lanes that your allies are having trouble with.

These guys are the ones who usually carry the team later in the game. So it’s important for this player to get as many kills as possible so they can ramp up quickly. Though for what they excel in firepower, they are usually very very fragile, and I don’t mean their egos(that’s a topic for another article). If I had to describe them in one word, they’re like a baby, weak and fragile in the beginning, but brimming with potential. Just feed and protect them, and you’ll benefit from it in the end.

If the Carry is the baby, then the Support is the mom of the team, even though taking care of the team is their job, their primary focus is geared towards keeping allies safe and getting them kills. Proper communication with the Carry, whether verbal or non-verbal is essential to winning your lane.

That area in between the 3 lanes is the Jungle. The Jungle players’ role in the team is ambush or ganks as others call it. They are there to punish the enemies who push their lane too far. Timing is key for this position as they are there to quickly kill the enemy Carry, and other squishy opponents. When playing this role it is necessary to get the Leech spell, which deals true damage to its target. This is to help kill the beasts in the jungle quicker. If cast too early, you run the risk of the enemy running away or the beast being stolen, too late and it might risk the lives of your allies.

I hope this guide helps you on your way to getting your next wins.