Things will be heating up for Tekken fans this coming ESGS 2016 as the Philippine Qualifiers for the upcoming King of Iron Fist Tournament 2016 will be happening at the event.

The qualifiers, presented by PlayBook Video Game Lounge and Bookshop with Bandai Namco, will be the third leg in the tournament for the region. With the Singapore, Malaysia and Indonesia qualifier happening earlier on October 7-9, and the Thailand qualifiers happening on the 5th of November. The winners for the various qualifiers will be able to compete in the Japan finals happening on December 10 this year.

The tournament will be held on the 2nd day of ESGS 2016. Participants would have to pay a fee of 50 PHP and would also need to purchase an ESGS ticket to get in the venue. The tournament venue will be on the Bandai Namco booth during the 3-day event.

Here’s the complete details for the tournament and registration: 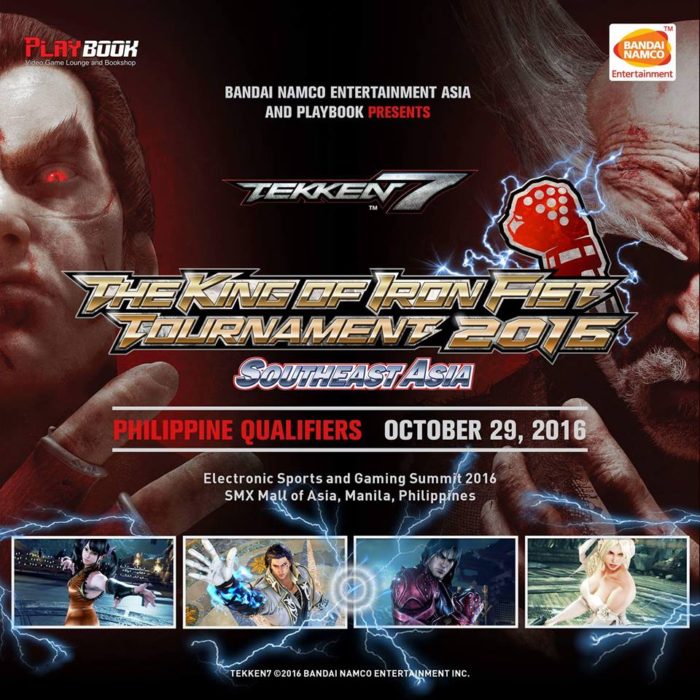 Number of participants will be limited to 64.
(Participants are encouraged to bring their own fightsticks.)

Registration is on a FIRST-COME-FIRST-SERVE basis. The first 64 players to pre-register and be at the Namco Bandai booth on October 29 to complete their registration will get the slots.

*Event will be streamed live on www.twitch.tv/playbook_ph

At the start of the tournament, players are divided into pools of eight or more people. The size of each pool depends on the overall size of the tournament. Each pool is run as a double elimination bracket, until there are only two players left. These top two players advance to the Semifinals.

Once all the pools have been run, the top two players from each pool move on to a new double elimination bracket. A loss from your qualification pool carries over to the Semifinals, so one half the players will start out on the “winners” side of the bracket, and the other half will start out on the “losers” side. The top eight players in the Semifinals advance to the Tournament Finals.

The Finals are basically a continuation of the Semifinal Bracket. Once again, losses carry over. The Finals end when all but one player has been eliminated.

For more info, you can head to the Playbook fanpage here.