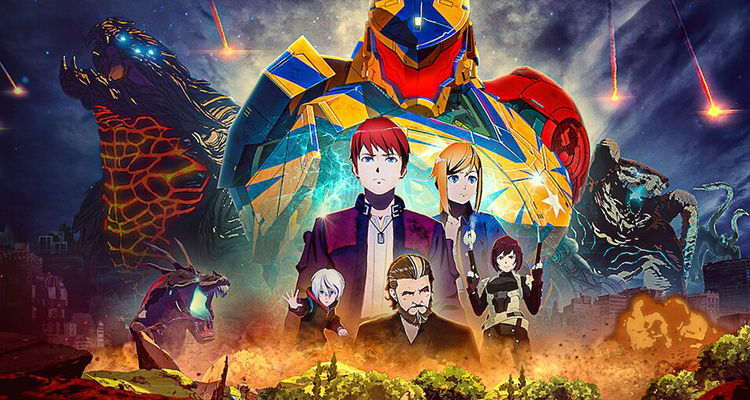 Disclaimer: The opinions stated in this article do not reflect those of the blog and its other writers. The author of this review is highly passionate about the titular franchise, so please take their ideas with a grain of salt and a glass of Kaiju “Milk.” – Carsian

Picture this: You are a young, 12-year-old kid, watching the opening monologue to a movie titled Pacific Rim (2013), knowing nothing about it, with no expectations and nothing to lose. This youngster falls in love with the world affectionately crafted by director Guillermo del Toro, daydreaming about seeing more from the franchise in the future.

That kid was me. Fast forward to 2018: The sequel, Pacific Rim: Uprising, had just come out to a tremendous, resounding flop, comparable to that of a soggy tuba played by a beluga whale. As a result of the near-universal backlash towards the sequel, all hype surrounding the rumored anime adaptation of the franchise died off. Many had even forgotten it was in the works.

That was, however, until the trailer for Pacific Rim: The Black dropped on February 6, 2021. Given everything I had hated about Uprising and more seemingly coming back to haunt me, I had come full circle, going into Netflix’s latest anime adaptation with no expectations and nothing to lose. Turns out, this was the best possible mindset to be in going into this show, and good grief was I wrong about it.

Pacific Rim: The Black is a Netflix Original Anime Series based on the film Pacific Rim (2013), directed by Guillermo del Toro. It is set an indeterminate amount of time after the Pacific Rim: Uprising (2018), and tells the story of Taylor Travis (Calum Worthy) and Hayley Travis (Gideon Adlon), as they set out to find their parents in an old, abandoned Jaeger after Australia had been locked down by a mass-scale Kaiju invasion.

Distanced from the dumpster

The tragedy of Pacific Rim: Uprising figuratively spitting on the original’s legacy left a bad taste in the mouths of many. However, diving into the series, I was immensely pleased to discover that The Black distances itself from and corrects the mistakes of the sequel, calling back to the original film much more strongly.

Many of the problems one would typically worry about having seen The Black’s trailer are addressed promptly and logically. Even things I initially disliked at first sight, such as Atlas Destroyer’s design and the cliché premise of the show, were explained and executed in satisfactory ways. As a result, this allowed me to get invested in the series right away, confident that the show would answer my questions.

I grew increasingly fond of the main characters and side characters alike (Shoutout to my boy Joel). Taylor and Hayley were a delightful pair of siblings and a joy to watch interact. Their actions had heavy consequences, and even by the end of the season, they were still not perfect at being Jaeger pilots. Adlon’s performance as Hayley was emotional and nothing short of impressive, given a character that could have gotten very annoying, very quickly.

A Fresh Coat of Paint, and Then Some

The Black takes the best parts of what came before it and utilizes the medium of animation to explore these concepts further. New ideas are built using existing ones, offering us a deeper look into Pacific Rim’s lore and worldbuilding. The Drift, for example, is visualized through falling into bodies of water and has a spectacular transition animation. Drift Tech itself is also explored in much greater depth, and the show gives us a glimpse of the horrific repercussions of using it recklessly.

Uprising suffered from floaty Jaegers and weak sound design, whereas The Black features much more convincing, impactful animation and powerful sound design. Trust me, I went back and watched scenes from all three entries in the franchise just to compare. Just as Pacific Rim had gotten too modern and holographic in its design, The Black brought back what the franchise did best: gritty, industrial settings, and desolate stone environments.

The show’s backgrounds are fantastic, being hand-painted rather than 100% CGI. The Black’s cinematography is very similar to the original film’s, using constant low angles and “real camera” setups to give scenes a tangible sense of scale. I constantly found myself impressed by how much Polygon Pictures did with little overall assets.

But more than anything, as a musician, I was most looking forward to hearing the show’s score. Let me tell you, Pacific Rim’s Main Theme may be a timeless banger, but The Black’s score did not disappoint at all. It was no surprise to learn that the show’s composer, Brandon Campbell, actually served as assistant to Ramin Djawadi, who scored the original film. Campbell did a phenomenal job at capturing what makes Pacific Rim so sonically unique.

Alright, I will admit that the impression I gave is that The Black is this franchise’s savior—a particularly flashy apology for Uprising. Is the show perfect? No, absolutely not. There are several things that keep it from reaching its true potential. Jaegers looked too clean and shiny no matter how battle-damaged. Characters like Shane (Andy McPhee) and Mei (Victoria Grace) remain undeveloped. Season 1’s short runtime of only 7 episodes leaves a lot to be desired, and a head-scratching cliffhanger at the end doesn’t help. The season finale was not at all a finale, but merely a stopover before it continues in Season 2.

But despite all these flaws, did I, a disheartened and beaten Pacific Rim fan have a fun time? You BET I did. And you can bet that I am eager for more from this show, as long as it sticks the landing and hits the ground running. Pacific Rim: The Black felt like an authentic Pacific Rim experience, and a genuine attempt to redeem the franchise.