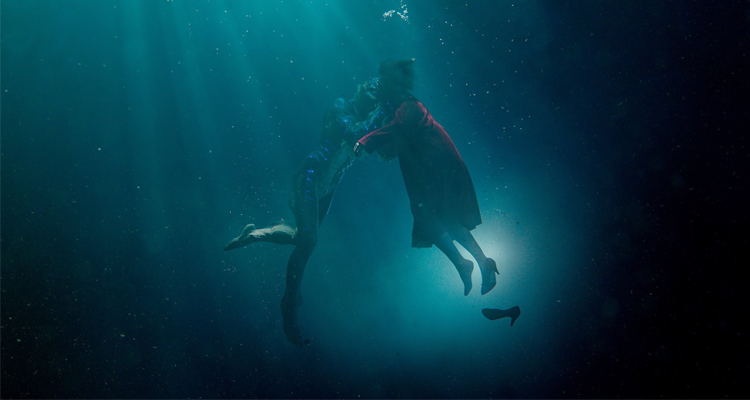 The Shape of Water

You can always count on Guillermo Del Toro to craft an eerie, jarring, unorthodox fantasy that people will still flock to see. Known for his poetic beauty of the horror genre, as he did in Pan’s Labyrinth, Hellboy, and Crimson Peak, Del Toro retells the trope of the monster’s bride as an unlikely Disney-esque fairy tale.

The film is about a woman who leads a literal quiet life as a mute janitress for a military research facility, where she meets, empathizes, and eventually falls in love with a captive subject – the Fish Man. The way del Toro sets up this highly improbable romance is very well thought of. Elisa being a mute sets her at equal footing with the Fish Man who, in a way, is in the same boat as incapable of standard human communication. If she could speak, her attempts to converse with him might make him seem like a pet. Because they both communicate through action, they’re equal in the conversation. Her character also points out that her defects and his being are equatable in the sense that they are both outcasts of society – which is meta with the film being set in the early 1960s of America – a time when racism and segregation are still blatant and rampant, and themes of fear and liberation are relevant. They eventually grow closer through sign language, body language, and appreciation of the arts. Before you know it, it seems completely reasonable that a human woman might fancy a buff sea creature.

What may be an acquired taste was in the film’s treatment in tempo. While maintaining constant imagery and colors of the murk and the solace of water, TSoW maintains a relaxed chill ambience altroughout the movie. Parts that would normally hold rising tensions and emotions are depicted in a calm, nonchalant tone – leading for some people who can’t appreciate said treatment to think the film is boring. And while this notion may hold a candle to the general viewer, as it takes an implored understanding to see that this is the intention – it really requires an effort to see the beauty and art in the poetic devices used in its metaphorical crafting. No one except the main villain showed any signs of emotional stress, even during scenes one would consider dramatic climaxes – save for a few key scenes. And it is when Sally Hawkins breaks away from her usual serene demeanor that you see how her holding back on her emotions gives weight to these scenes. It truly is given an art film treatment that may raise a few eyebrows in a casual movie-goer setting, but it leaves you with clear raw feelings if you’re in it to be swept away by the promise of a fairy tale.

It’s a cute film, with a lot of warm fluff, old Hollywood romance tropes, and musical dream sequences. But at the same time, it still reminds us that it is a horror film . There’s violence and blood and harsh reality. It is every bit a fairy tale as it is also a moral, political and social commentary.

It’s best feature is undoubtedly Sally Hawkins‘ portrayal of the homely mute Elisa. Even with her character not being able to talk, or that she is mostly chill and happy-go-lucky throughout most pf the movie, she has the most impressive display of emotions, expressed solely through her face and body language. It is in this raw display that makes you truly connect with her and empathize in her plights and joys.

Nobody makes horror quite as romantic. Del Toro holds dream, nightmare, and realism in perfect balance, pulling you into the dark while holding your hand tight enough for you to still feel safe. And that’s where the thrill of most of his work comes from. It’s a safe and majestic tour of the weird and macabre – the idealizing of the strange and the scrutiny of what we accept as human and as normal. And though Pan’s Labyrinth still holds the place of being his best work yet, The Shape of Water comes as a close second.

Plot
Screenplay
Music
Casting
Cinematography
Design
Reader Rating1 Vote
The Good
Sally Hawkins
The aesthetic
The metaphors
The Bad
It's a tired and tried story despite the twists
The Lack of tension can be offputting
4.4