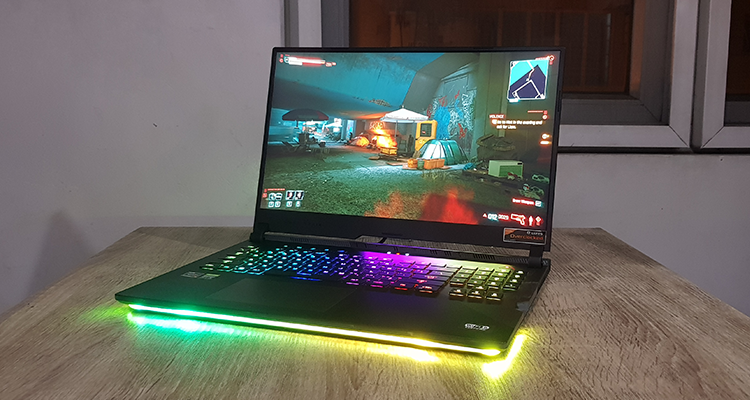 Nothing gets me more excited than next-generation hardware being launched and being able to test it with games and benchmarks and playing the numbers game. This time, we get to tell you about the latest from ASUS. Join us as we explore the capabilities of the latest update to the ROG Strix Scar series, the 2021 Strix Scar 17 (G733Q). 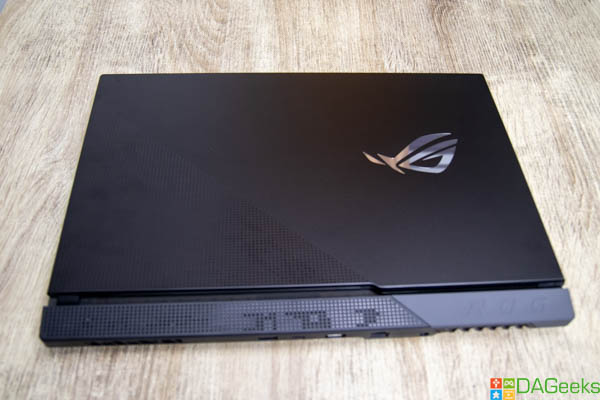 Let’s kick things off with the design. The Strix series from ROG has always been oriented to e-sports gamers, and this time around, the Strix Scar 17 definitely shows its athleticism with clean cuts across the lid.

Bearing the Scar namesake, this specific series has a customizable Armour Cap to suit your personal style. Out of the box, it comes with 3 different Armour Caps and templates are available should you desire to 3D print your own and make your Strix Scar 17 one-of-a-kind. The Scar series also features Aura Sync accents all around. 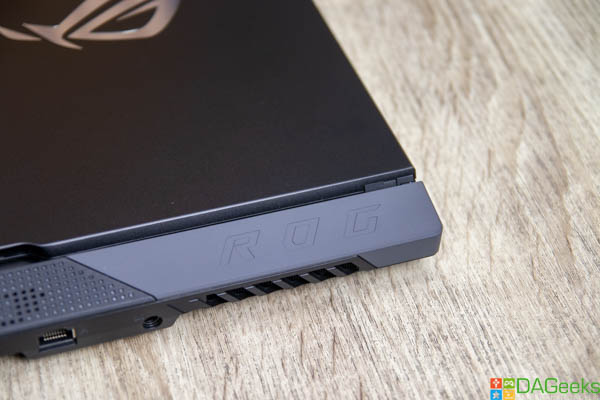 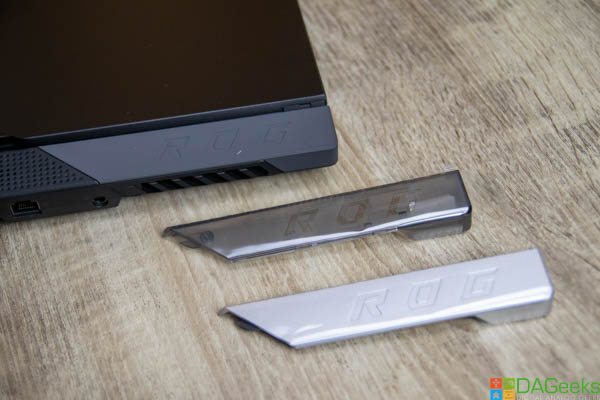 The wraparound LED underneath though now only occupies a quarter of the front lip to make room for more vents. They also added RGB lighting underneath the screen, which is pretty good to look at, subtle and stylish, in my opinion. And yes, the ROG logo is configurable too.

When I first got the device, I thought it featured an AniMe matrix screen on the lid. To my dismay, it was just a dot matrix design. But upon closer inspection, the lid looks really nice when light shines on it from different angles plus it’s fingerprint-resistant and is very smooth to the touch.

The most notable update is the soft-touch paint on the palm rest. It’s very comfortable to use and I was surprised at how it can easily be cleaned when it develops an “oil patch” thanks to its smooth surface. It’s also cool to the touch even after long hours of gaming. And it also has a translucent patch in the upper right corner, giving it a more “cyberpunk” look.

The Strix Scar G17 has all the necessary ports you need in a laptop, whether you’re making it your desktop alternative or connecting a bunch of peripherals needed for your work. You will find the majority of the ports on the back side. Here you have a USB 3.2 Gen 1 Type-A, which used to be on the left side; a USB 3.2 Gen 2 Type-C, which supports DisplayPort & 100w PD charger; an HDMI 2.0b port; a gigabit LAN port and your charger port.

On the left side, you have 2 USB 3.2 Gen 1 Type-A, perfect for your gaming keyboard and mouse, and a 3.5mm combo headphone/mic jack. Previous generations of this laptop have all 3 USB Type-A ports conveniently on this side, which means you might have to plug your USB headset on the Type-A port at the back. 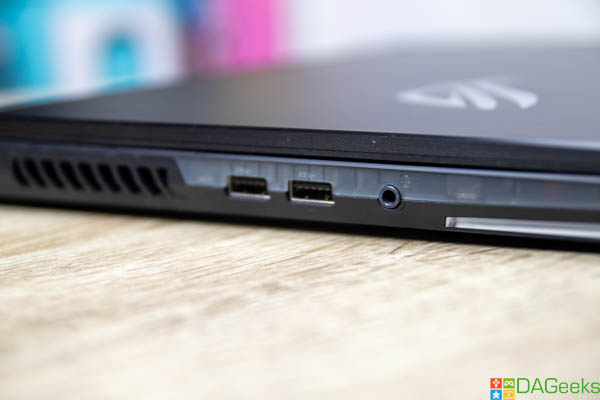 Nothing much to see on the right-hand side but a slot for the Keystone, which I’ll discuss in a couple of paragaphs down, and a bigger vent. 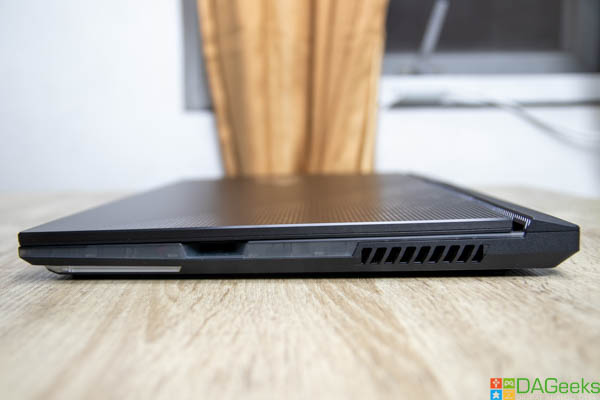 It blows my mind at how companies manage to get the next gen laptops to be smaller than the last one. Not only smaller, but also more powerful. The 2021 Scar is around 7% and 5% smaller than the previous generation 15” and 17” Scar, respectively. The 17” is truly immersive with its very narrow bezels and has an 85% screen-to-body ratio. It feels like you’re carrying a 15” laptop with a 17” screen inside. 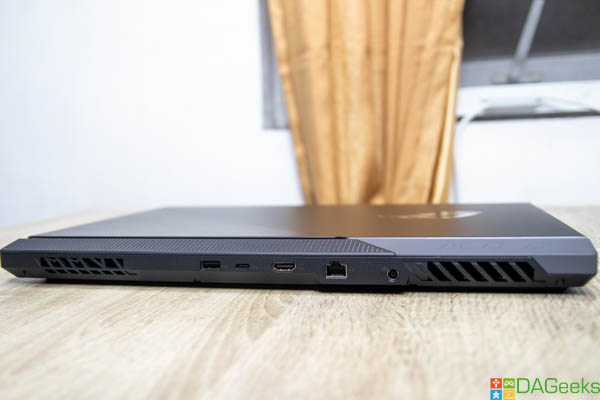 The Strix 17 runs on the latest Cezanne CPU from AMD. Our unit got the AMD Ryzen 9 5900HX and you can’t imagine the power running inside this thin 17” laptop. The Ryzen 9 5900HX has 8 cores and 16 threads, capable of processor-heavy tasks anytime, anywhere. Just make sure you bring the bigger power brick with you. Even better is the fact that ASUS managed to squeeze in liquid metal cooling with this chip so you can get cooler temperatures under load. That’s the secret to making a powerful, portable machine, managing thermal output. During our tests, and by tests, I mean gaming and a couple of photo editing here and there, the laptop remained relatively cool in all the right spots. The keyboard has no hotspots and the palm rest are as comfortable as when you first fired it up. 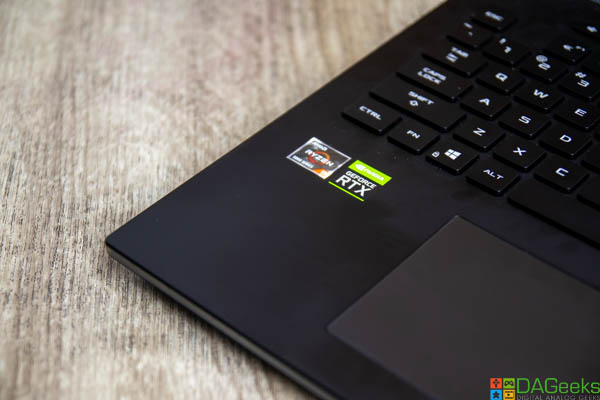 This won’t be cutting edge if it’s not powered by the latest GPU in the market today. Given where the market stands in terms of availability, your one shot to get ahold of a 30 series graphics card is through a gaming laptop or a prebuilt desktop. The G17 can be configured with up to an RTX 3080. Do take note however that there’s been news around the 30 series chips in laptops. If you’re out of the loop, here’s a quick rundown. Previously, NVIDIA designates MAX-Q to its mobile GPUs to let users know that it’s a lower wattage version of desktop-grade GPUs of the same name. Why? Because to put it simply, putting a full-powered desktop GPU into a thin laptop chassis will melt stuff if it gets pushed to its limit. Then there’s the MAX-P version, which performs close or even equal to desktop-grade GPUs. Well, for the 30 series of GPUs, NVIDIA dropped the nomenclature and instead consumers have to rely on reviews or manufacturers to get an idea of what kind of GPU they’re getting. In this case, our unit (G733) comes with a 115w NVIDIA GeForce RTX 3080. That’s almost half the consumption of a desktop version of an RTX 3080 which pulls around 320w of power. This gives you a rough estimate that it may perform at half the power of a full-fledged desktop RTX 3080. But given the results of our benchmarks, this 115w RTX 3080 is more than enough to power the latest AAA games at no less than 60FPS in 1080p.

Our review unit came with 32GB of DDR4-3200, and it’s plenty enough to do multitasking with. Paired with speedy NVMes in RAID 0, the user might be the bottleneck if their productivity is not going up. We’ve tested the G17 with a mix of synthetic and game benchmarks. And well, it performed way beyond my expectations. Read on to see the benchmark results below.

We ran the benchmarks in 3 different profiles: Silent, Performance and Turbo. 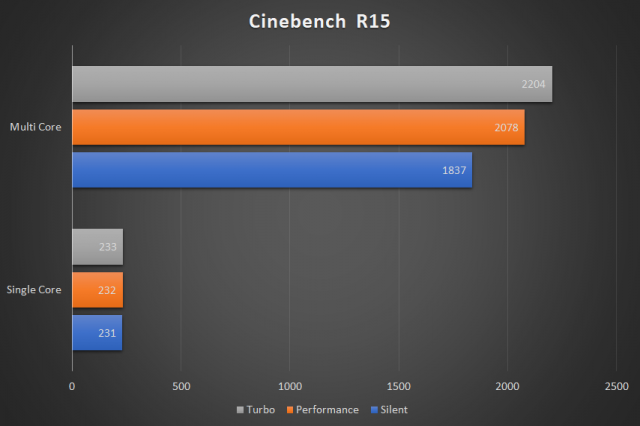 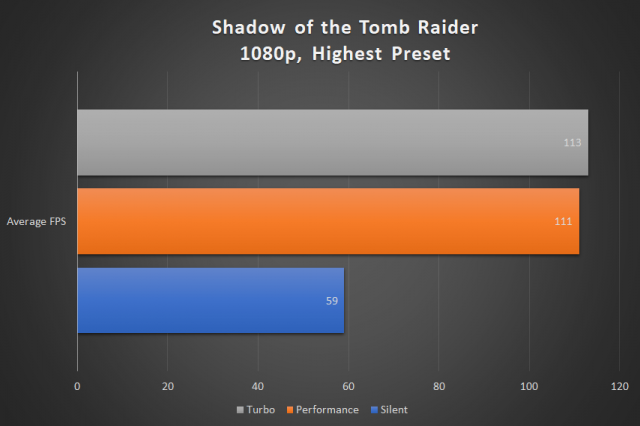 The 17” screen is a beauty. Now remember, this is a Scar edition Strix which is primarily aimed at gamers who love to play fast-paced FPS games. The Strix Scar 17’s panel is one of the world’s fastest laptop displays with 300Hz of refresh rate @ 1080p with 3ms grey-to-grey response. I ran Cyberpunk 2077 in this machine and the Ultra Ray Tracing settings really shine. Night City colors pop and the tear-free experience provides a very satisfying gameplay, while also keeping Cyberpunk above 60 FPS. Content creators will also have a good time using the 17” screen with 100% sRGB color coverage for more accurate color representation. 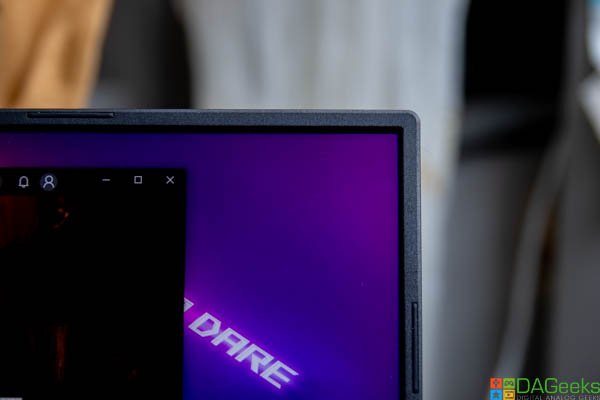 The Strix Scar 17 is outfitted with optical-mechanical switches, which makes sense for its slim form factor and gives users the mechanical keyboard feel. Personally, and this is my personal opinion, I don’t like the travel on the optical switches. Don’t get me wrong, it feels better than rubber dome keyboards, I’m just not used to it. The Numpad is also positioned higher than usual, so that will also take a while to get used to. But overall, the keys are properly spaced and makes for a very good typing experience. 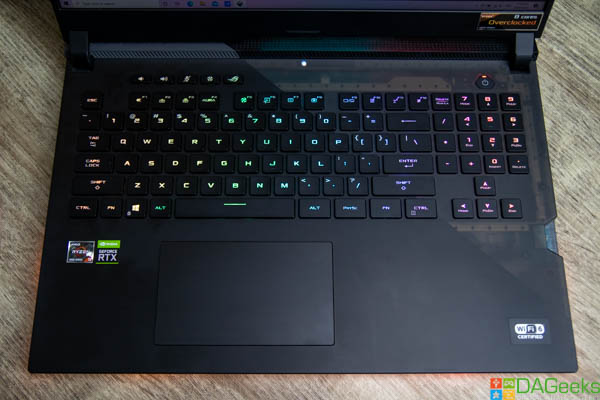 The trackpad is very smooth and responsive. It’s also 85% larger than previous generations. The glass pad is also coated in a matte finish that gives users greater precision when using it. The one thing I don’t like is the left and right-click buttons. Sometimes it doesn’t register the first time and you can easily accidentally press it as the whole pad is clickable. Good thing the Strix Scar 17 comes with a ROG Chakram Core out of the box so you won’t have to deal with the touchpad that often.

This the thing I love when purchasing ROG laptops. It comes with all the accessories you’ll need to start your gaming session as soon as you go home. The ROG Strix Scar 17 comes with a bunch of accessories that can help you start your streaming career after unboxing. 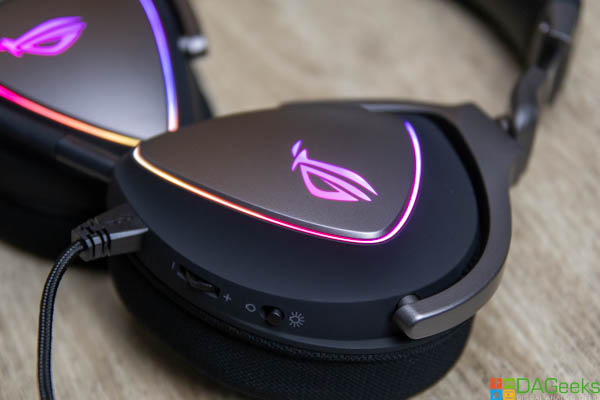 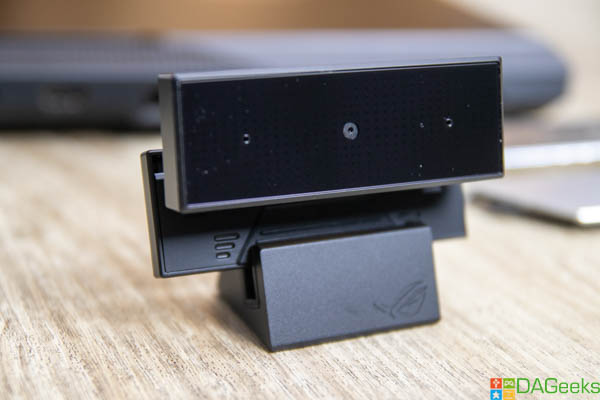 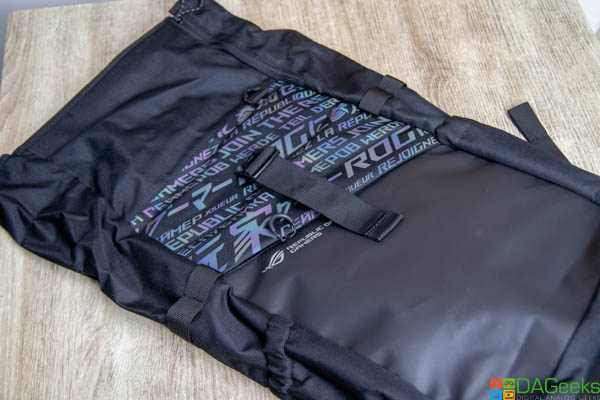 If you’re looking for the best specs in a laptop that money can buy, you’re looking at it. The ROG Strix Scar 17 brings you the peak performance a gaming laptop is capable of. Top tier hardware, top tier build, solid accessories all around. For the price, this machine is a bargain considering how hard it is to build a gaming PC today. It’s has a much lighter, smaller footprint, but with almost twice the power of the previous generation Strix. If the LEDs are too much for you, you can always turn them off. Hooray for choices!

Running the latest AAA title in the ROG Strix Scar 17 is a breeze thanks to its RTX 3080 paired with 8-cores of Ryzen 9 goodness. It’s literally one of the best laptops money can buy right now. The 300Hz screen is smooth as butter, especially when playing fast-paced games and thanks to its slim bezel with an 85% screen-to-body ratio, the 17″ screen feels very immersive. And with all the accessories you’ll get? It’s definitely worth every peso.