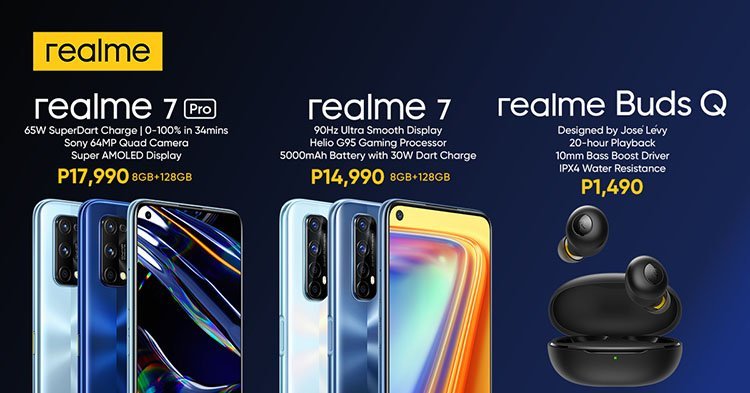 realme 7 Series and Buds Q Now Available in the Philippines

realme Philippines has officially launched the new realme 7 series and its latest smart audio device, realme Buds Q. Following the launch of its C-series, realme goes back to its number line-up the realme 7 and 7 Pro.

The realme 7 Pro is equipped with a 65W SuperDart Charge, making it the Philippines’ fastest-charging smartphone, charging from zero to 100% in just 34 minutes. This charging power is favorable for intense daily hustle as it minimizes smartphone downtime. The device’s Qualcomm Snapdragon 720G Mobile Processor also ensures that the overall performance of the device is smooth and top-notch.

There is a global uptick of 35% in weekly mobile game downloads in March as people around the world stay safely at home and look for avenues of entertainment. IDC and App Annie also reported that mobile is now the primary driver of growth for digital game consumption. To make sure the youth get to continue to slay their mobile battles, realme designed realme 7 specifically for mobile gaming enthusiasts. Under the phone’s hood is the world’s first MediaTek Helio G95 Gaming Processor, which makes the realme 7 one of the most powerful smartphones for gaming and entertainment in its price point. It also packs a 5000 mAh battery with a 30W Dart Charge, ready to power the digital adventures of its young users.

The realme 7 and 7 Pro are the first smartphones in the world to receive the TÜV Rheinland Smartphone Reliability Verification, which contains 22 major tests (12 daily-use scenarios, four components reliability, and six extreme environments) and 38 minor tests. realme has upgraded quality test to further improve the reliability of the smartphones, making realme users freely enjoy the pleasure brought by the leap-forward technology and trendsetting design.

The latest Artificial Intelligence of Things product from realme is officially available in the Philippines, ready to rock the world of young Filipinos with an elevated audio experience.

The device has a 10mm Large Driver and a Dynamic Bass Boost. Going beyond its technology, the realme Buds Q is also a fashion statement on its own as it sports the artistic genius of José Lévy, the cooperated designer of Hermès and the art director of the realme Design Studio. For its design, Lévy took inspiration from the round cobblestones found along the shores of Normandy beach. This artistic and ergonomic masterpiece is both chic and comfortable, made with a premium 9um Spark Pattern special polymer composite diaphragm, an IPX4 water resistance, and a weight of 3.6g, lighter than a sheet of A4 paper.

realme has also partnered with Home Credit. Starting September 30, the realme 7 and 7 Pro can be availed with 0% interest installment plans for either six or nine months. They also have special promos for lucky customers in select stores nationwide. The first 10 to buy the realme 7 Pro will be getting free realme Buds Q while the first 10 buyers of a realme 7 will get free Buds Classic worth Php590. The participating kiosks for this promo are located at SM North EDSA, SM Megamall, SM Fairview, SM Mall of Asia, SM Calamba, SM Dasmariñas, SM Sta. Rosa, SM Manila, SM Pampanga, and SM Bicutan.