So first thing’s first. The realme 6i is a 6.47″ unibody designed smartphone. A slightly longer smartphone than the brand’s flagship, the XT. With a 6.5″ “Mini-drop” Fullscreen where it basically means that the font camera is situated on the middle of the screen. It’s also a heavier than it’s contemporaries with it’s weight at 199 grams.

The phone was designed by Naoto Fukasawa, the designer of the brand’s XT Series.

The weight itself on every day use is of no issue, and I actually appreciate a heftier phone. Since the new lighter phones have the tendency to feel like they aren’t there so I always need to double check if I have them on me, not with the realme 6i.

The unit has three slots available with a slot dedicated for a microUSB (which can take up up to 256GB).

The realme 6i uses an IPS LCD IPS LCD capacitive touchscreen. This means that the screen uses a wider set of colors and is great for both gaming and media consumption. The phone uses a 720 x 1600 resolution so games and apps like Netflix would feel a bit compressed especially if you have them at full screen. However this doesn’t affect much the viewing and gaming experience one bit so at least that’s a good thing.

The realme 6i carries a beefy 5,000 mAh battery with an included a 18W quick charger. The charging pretty much works as expected with the battery getting from 16% – 100% battery life in a span of three hours.

I actually appreciate that realme finally put a USB Type-C port with their sub 10k phones with the realme 6i. And I hope they continue with these on their succeeding releases.

So moving on to the next most important aspect of the realme 6i, is of course the gaming experience. Since most games these days are made for the mobile, it’s pretty much expected that the realme 6i should at least be able to provide optimal experience. So here’s a listing of the games where I did a test run with the realme 6i which practically covered much of the general game genres that people are using smartphones right now.

I played a lot of Kill confirmed matches in Call of Duty Mobile for this test and the overall experience was decent. The game automatically set the graphics to low so if you’re one of those gamers who want their CODM games at higher specs. But of course, if you’re the more competitive type, you’d rather have the low spec games for faster response and reaction time.

On this end the realme 6i doesn’t disappoint. Even with the IPS screen almost blinding you at times due to the very colorful nature of CODM battles, the response and reaction time the screen provides isn’t too shabby. The longer screen does affect how you’d interact with the game’s UI, it’s just a minor adjustment on our end would make it a more pleasant and kill-heavy experience (at least if you’re using a sub machine gun for game modes like this). 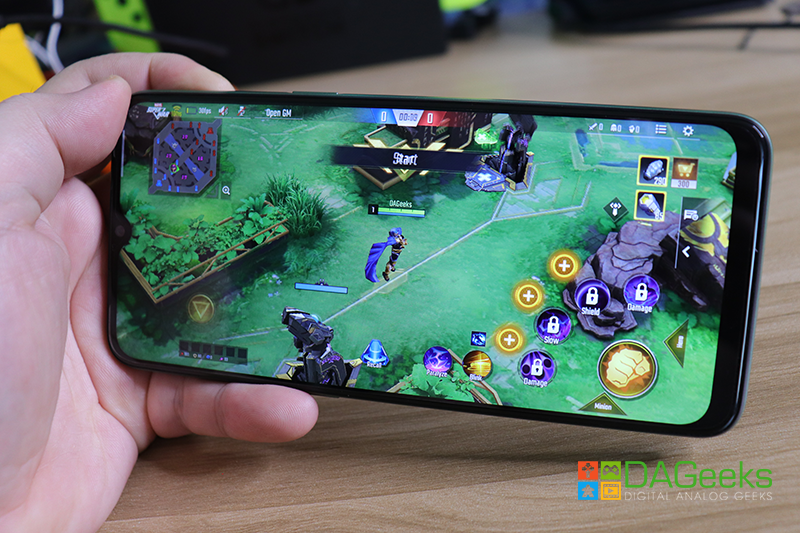 Moving next to the MOBA genre, My personal game of choice would be Marvel Super War (well up until Wild Rift comes out). And the phone performs exemplary on this game. With the game setting the graphics to low, it does take a bit away from my experience (at least) since I’ve been playing MSW on high/ultra settings on my day to day phone.

The experience has been exemplary, even with the bright colors almost blinding you (since MSW is pretty colorful too like CODM, or maybe I just need to rest my eyes) my experience with MSW with the realme 6i is pretty solid. There wasn’t much lag input and the longer screen was somewhat pretty helpful with the inputs in-matches. Though unlike with the other phones my hands pretty much cramped up a bit more than usual since I would have to stretch my hands a bit more than what I got used to.

For card games, I could’ve used Legends of Runeterra as the benchmark, but I decided to go with what my heart wanted, Vanguard ZERO, Cardfight Vanguard‘s mobile version.

For my Vanguard ZERO experience, the realme 6i showed significant upgrades from what I got to experience from other smartphones. Usually, when I was playing Vanguard ZERO in my room, I’d be constantly disconnected from matches even if I switch between the 5 ghz or 2.4 ghz connections. But with the realme 6i it never once happened to me, and considering that the phone only has the 2.4 ghz frequency. This is the most significant gameplay experience I got from the realme 6i and it shows how solid the phone’s connectivity is.

Next up of course is the phone’s media usage experience. The realme 6i’s IPS LCD powered screen allows for brighter screens on Netflix and YouTube show’s I’ve watched with it. The brightness also provides better lighting on darker scenes with the phone. Also reading on the phone is pretty comfortable even with they eye care. It does take adjusting to especially with the phone’s dark mode, but then again reading with white text and a dark background really hurts the eyes more than it helps.

It’s kind of expected (at least for me) that a sub 10k phone won’t have a good audio output, and I wasn’t surprised that the realme 6i doesn’t do well on that area. While I’m not saying that the downfacing speakers are terrible, it’s just that the audio quality suffers on higher volume. In fact, if you’re the type where you don’t like your video audio breaking up then it’s best to have the volume at mid volume max.

One thing that I liked with the realme 6i here is the connectivity feature that I experienced with Vanguard ZERO. I tried watching Netflix and YouTube videos on areas that I would normally have no connection at home and the realme 6i still delivers. With no disconnection happening. The seamless connection that the 6i brings helps me feel like I can practically go all over the place (at home at least) without getting my media consumption experience getting cut.

The Main camera along with the fingerprint sensor

Moving away from the Video Games and media use for the realme 6i. We’re moving on to the next most important aspect of the phone, it’s camera. The 6i has 48MP AI Quad Main Camera which has a Normal + Wide-angle + Macro + Portait lenses. While the front Camera uses a 16MP lens.

I did a set of test shots for the realme 6i using the main camera so you can check them out below:

So far I’m pretty happy with how the shots ended up. But of course I still want to take shots with the DSLR (at least for me), the realme‘s camera is enough to provide decent shots if I’m on the go.

What stands out with the realme 6i is it’s connectivity. This was most significantly present during my Vanguard ZERO and Netflix/YouTube test. This is pretty significant especially for people who have to actually move around at home just to get a decent link with their personal Wi-Fi connection.