Let me start off with a meme: 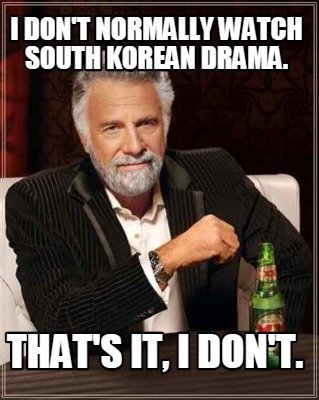 For the first time in my life, I was able to power through a South Korean drama series. Fortunately, it is not one of the sappy types that I don’t watch in general, but a suspense/political zombie drama.

Kingdom is based from the 2014 webcomic Kingdom of the Gods by Kim Eun Hee and it tells the story of Crown Prince Lee Chang (Ju Ji-hoon) who starts off by just evading the political threats that are aimed at his life and his birthright to be the next emperor of the Joseon Dynasty. In the process, he unveils an even bigger threat to the empire and to life itself; a sickness that never really kills its dead. In his quest, he is joined by his bodyguard Moo-young (Kim Sang-ho), physician Seo-bi (Doona Bae of Cloud Atlas and Sense8 fame), and vagabond sniper Cho Beom-il (Jung Suk-won), all of which have their own secrets to keep and stories to tell.

Before I starting watching, I went around to ask what people’s first impressions of the series are. They seem to be at a consensus: Kingdom is a Korean Game of Thrones.

That got my raising my eyebrow, of course.

Upon watching, it took me around 10 minutes to see why they thought so. As the series rolled, I was able to anticipate a lot of things that can possibly happen. I’m not sure whether it’s because I’ve seen so much of the tropes in there, or the writing was very predictable. That was what I thought until I saw the last scene of the season-ender. It was definitely the curve ball the series needed to make audiences invested and keep watching once the next season rolls in.

Technically, all the sets and sounds of the series are indicative of a typical Korean period drama, with the colourful and era-appropriate buildings and costumes. Not much to say here, really!

To be honest, I will not be surprised if there’d be a train full of zombies suddenly barging down upon the Imperial City of Hanyang for some reason. Kingdom is another SK drama which provides another take on the political-drama-with-zombies trope. A second season is reportedly in the works, so we will see whether they break monotony with the upcoming season or stay being predictable even without reading the source material first.