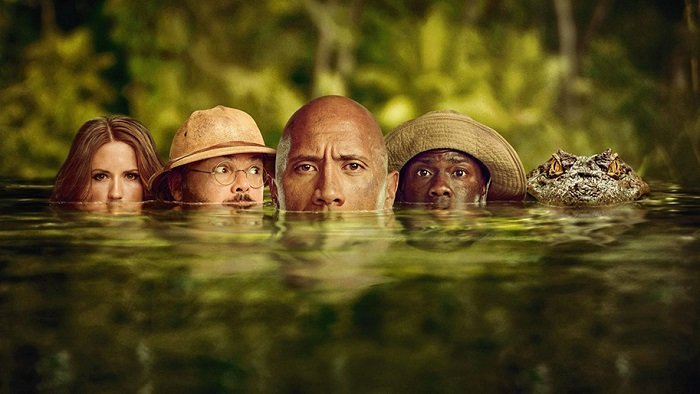 Jumanji: The Next Level

Sequel culture has become a Hollywood staple. Before, whenever a movie came out, people will have to be at peace with how it ends. Now, in this day and age, movie makers have discovered that when people like one movie the first time, it is possible to count on its success to merit sequels, or continuations to the primary story. More often than not, it works. Sometimes, it flops. In the case of this movie I am reviewing, most people are on the fence.

Jumanji: The Next Level is a direct installment to Welcome to the Jungle, who in turn succeeded the original Jumanji movie. If you are familiar with the first sequel movie, then you will know about Smolder Bravestone (Dwayne Johnson), Ruby Roundhouse (Karen Gillan), Mouse Finbar (Kevin Hart), and Shelly Oberon (Jack Black). who are adventurers in the video game version of Jumanji. However, lineups of who plays who change when two new players from real life come in, specifically Spencer’s (Alex Wolff) grandfather Eddie (played by the eternally funny Danny DeVito) and Milo Walker (by the eternally talented Danny Glover). Aside from tackling the game’s main objective of defeating new boss Jurgen the Brutal (Rory McCann, who you probably know more as The Hound from Game of Thrones), they also deal with the real-life reconciliation attempt of Eddie and Milo, who had a fallout after they sold their diner 15 years prior, causing a rift.

The movie maintains its use of video game tropes, such as the use of ability screens for their characters, presence of NPCs who only say several sentences no matter the situation, and the mechanic of having only several lives to work with. It also introduces new characters, such as thief Ming Lightfoot (Awkwafina) and Cyclone the peg— horse (watch the movie to find out Cyclone‘s surprise awesome ability), as well as re-introduce characters such as Seaplane McDonough (by still the hot Nick Jonas). The gripe I have with the movie, however, is the incredulous time it took for Spencer to re-assemble the broken pieces of the video game console and perhaps program a whole new story for the game in the span of less than 24 hours. I wish this angle was explored further. Another notable detail in the movie is how they recycled the Big Mountain song, as if it triggers Roundhouse‘s ability to ‘dance’ with her opponents. But no matter, the scene was still good to look at.

When I said people were on the bridge with the movie, it means that it got mixed reviews from several other reviewers, which I agree with and will cite below:

The world did not need a follow-up to Jumanji: Welcome to the Jungle, but the addition of Danny Glover and Danny DeVito keeps Jumanji: The Next Level afloat. – Sara Stewart, New York Post

It doesn’t have the surprise factor of the last film and sometimes feels rough around the edges, but The Next Level pushes its body-swap antics even further to deliver just as many laughs. – Ben Travis, Empire

It’s a given that in our day and age these movies will always hew closer to the action/video-game end of the spectrum than the spoofy-comedy end. (Let’s face it: They make more money that way.) But even taking that into account, 2manji feels kind of lifeless. – Bilge Ebiri, Vulture

While The Next Level did not bank as much into the box office as Welcome to the Jungle did, it still was funny, a spectacle to look at in several scenes, and did enough to connect to audiences emotionally, especially as the movie reached its denouement. It also gives the non-gamer moviegoers a fair grasp of what to expect when playing video games, and can perhaps understand now why gamers tend to get so invested in playing. Lastly, it continues to show the sign of the times wherein a former board game became a video game as time passed, and that is how people will remember it now.

Special thanks to 99.5 Play FM for the screening! Take a listen to them online.