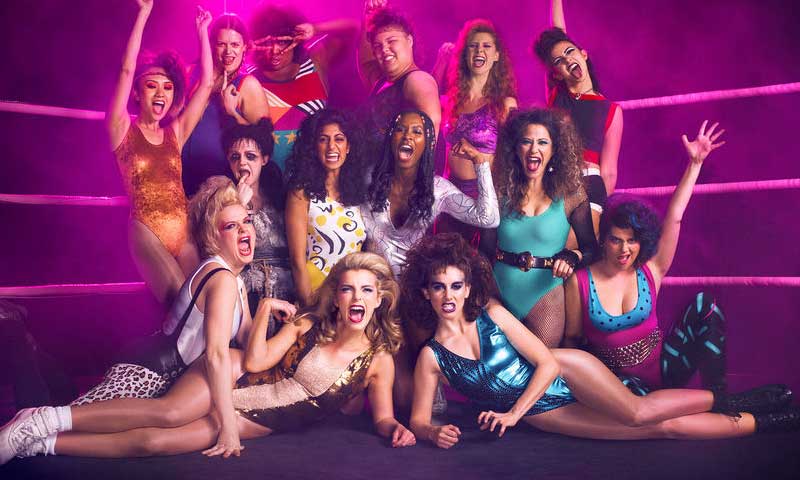 “But Brenda, I’m not into wrestling at all,” you might say. And that’s alright. Most of characters aren’t either. Despite its premise and it 10-episode half-hour run of hairspray riots, spandex, and a bunch of women kicking butt, GLOW isn’t really about wrestling.

It starts off with the show’s main anti-heroine, Ruth Wilder – played by Alison Brie (Community, Mad Men), a self-sabotaging unemployed but serious actress who likes reading for men’s parts in auditions – answering the call for “unconventional women” to attend a mystery audition. Here she finds real women of the 80s – other women who can’t get cast in Hollywood at the time because they fail to meet the damsel image of the time. This is where Ruth’s best friend, Debbie – played by Nurse Jackie’s Betty Gilpin – storms in, screaming bloody murder, accusing Ruth of sleeping with her husband. Now this is an “Oh come on” moment. It’s a familiar setup for drama and hostility that’s way to convenient in timing and setting to push a storyline. Even the characters in the background were like, “Is this real?” as the two girls go at it. “Who the fuck cares?” was the reply, summing up both wrestling and the essence of this show. It’s a show that grabs your hand, throws you across the stage against the ropes, and charges at you. Whether it’s all just an act, or it’s really coming at you at full force, you can’t help but smile as it happens.

While being a show in 2017 to be able to conclude with good vibes may sound tough, GLOW is one of those Netflix series that’s able to leave viewers satisfied. The appeal and heart is in the rift between Brie’s and Gilpin’s characters – their once warm and enviable friendship and intimacy painfully devolving into literally a physical fight, which ultimately closes into an unsettled truce as the first season ends. And there are no painted heroes or villains either. Each character is fragile in their own way, and have become subject to unconscious motives of both malice and strives for redemption. And that dance in the gray area is what makes the show feel real and dear. Despite all the laughs the show has to offer, GLOW serves up emotional weights anyone can relate to when dealing with cracked eggs and spilled milk in relationships. And the same goes for the supporting cast as well. In a span of 5 or so viewing hours, GLOW does a good job in keeping of its side characters’ wild eccentricities distinctly engaging without straying too far from the main plot.

Despite knowing how sleazy and fetishized the premise they have to work with is, the cast takes this opportunity to express themselves onscreen in an unself-conscious and empowering way. When else has a series ever depicted women of every size and color throwing off all vanity and slamming each other to the floor with abandon? Almost never. In fact, the last known popular attempt to do so was by this show’s producer as well. If you’ve already watched a few episodes of GLOW, you’d notice that the treatment of women issues and racism are similar to how it was tackled in Orange is the New Black, albeit in a lighter and warmer tone (coz get it? Glow?) It’s thrillingly frank about discussing body issues and sexuality.

All in all, GLOW celebrates the well-worn tropes that wrestling portrays, along with dialogues and character relationships that fuel good TV – best friendships marred by betrayals, scandalous romances, finding out you have a long-lost child, a bunch of misfits coming together to put on a great show, among others. None of these concepts are ground breakingly new, but GLOW has tailored them in a way to leave you feeling unguarded and raw – much how we let memories of simpler times catch up to us. Truly, GLOW’s strength is in weaving guilty pleasures and nostalgia with an emotional narrative, teasing us even with a non-conclusive “will they or won’t they?” ending. Definitely a must-watch.