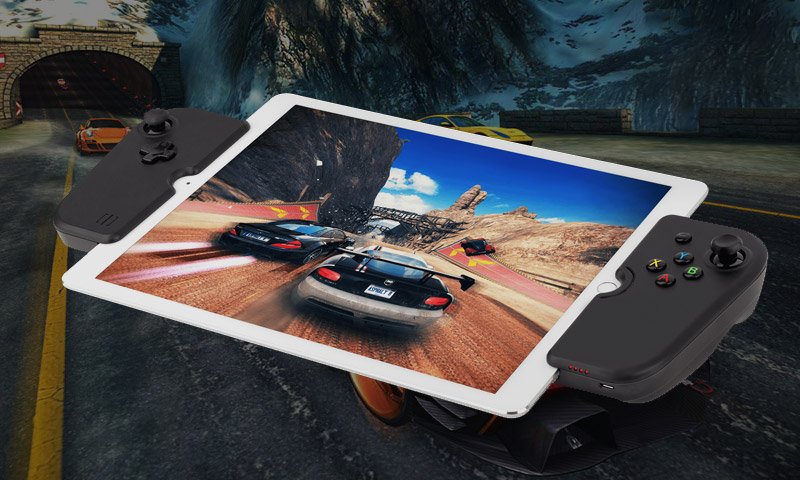 I’ve been given an opportunity by Beyond the Box to test out the Gamevice mobile controller for iOS devices. It’s been a really long while since I posted about it on our Instagram account but then real life was a bit busy when I was handed the device over.

The Gamevice is a real solid piece of tech that you won’t be afraid to have your devices connected to. The build is solid and that even if it’s made out of plastic. It doesn’t feel flimsy nor does it feel like it’s going to easily break. The analog sticks also feels flexible at the same time feel solid enough to not break from overuse even with the more punishing online games. There’s also no lag time between control input vs. actual game control which is really important for the more action-oriented titles and most especially since fighting games like  Street Fighter IV is going over to the mobile platform. (and Gamevice even has a Street Fighter IV bundle)

It’s controller layout is reminiscent of the Wii U Controller with the two analog buttons at the top most part of the controller and the directional buttons are found on the right side of the design with the classic X, Y, A, and B buttons are found on the right side in a cross pattern. For the first few hours it’ll feel weird and different if you’re more used to the traditional PS4 or even Xbox controller button layout design, but the discomfort will peter out with continouus play.

One of it’s drawbacks is of course the price. Since the Gamevice is an iOS exclusive device, the controller comes with a hefty price tag of 5,490 PHP for the iPad version (while the other smaller versions, for the iphone, range from 3,000+ – 4,000+ PHP). In a market where there are a lot of controllers that you can buy now, any person, even the most loyal of Apple fans may think twice in purchasing the fangled thing.

Another drawback I’ve seen with this iteration of the Gamevice is that the GV150 uses the tablet’s battery unlike it’s other models, the GV141 or GV151 that has a separate rechargeable battery. While the site claims that the power draw is minimal. If you’re someone who balks at the idea of anything that eats up your battery life while using it will find issue with this no matter how minimal. But then again, if you’re someone who’s gaming on a tablet and hopes to have a long battery life needs to get their head checked, because gaming in any way or form really eats up battery life no matter what the platform is.

Also, for the mobile MOBA fans out there, Gamevice is not compatible for any of the more popular mobile MOBA games our there right now. So if you’re getting a Gamevice controller to play games like Mobile Legends and it’s ilk, I suggest you stop doing so now. And just an asides, if you’re hoping to use Gamevice while playing Vainglory, I’m seriously suggesting that you just practice and keep on playing because using a controller for a game like Vain Glory would make things more difficult for you.

With that said however, if you are someone who has no issues with the price, and has enough time in their hands to check through Gamevice Live, the device’ default app to search for compatible games with Gamevice will be rewarded well with the amount of options available for you to play the device with. The game library is huge and there are even newer titles as part of the options. Recent titles included in the Gamevice Live roster are NBA 2k17, Super Street Fighter IV, and The Walking Dead A New Frontier. Classic platformers like original Rayman is also compatible with the Gamevice along with the more popular free-to-play action titles like Marvel Future Fight and Dynasty Warriors Unleashed (which I personally played even though it’s not part of Live’s list of games).

Overall, Gamevice is one of those nifty accessories for your iOS device that you’d like to get if you’re the type of person who like to game on their iOS devices and wants to relive or at least feel like you have a console in your hands instead of the virtual controls most mobile games tend to use this days.

It’s a controller that’s really portable most especially with the way the middle of the controller is made out of rubber instead of a solid material that you can bend the device while putting it inside your bag. It does however eat a chunk out of your wallet, so you might want to think twice (or thrice) if you’d really like to get Gamevice for gaming with a lot of controller options out in the market right now. But if you’re someone who doesn’t really care for the price tag, and at the same time wants to get a solid controller for your iOS device, Gamevice is just for you.

Here’s an unboxing video done by yours truly to see what’s inside the box:

You can get the Gamevice in your nearest Beyond the Box branch near you. Or you can head to their fanpage to know more.