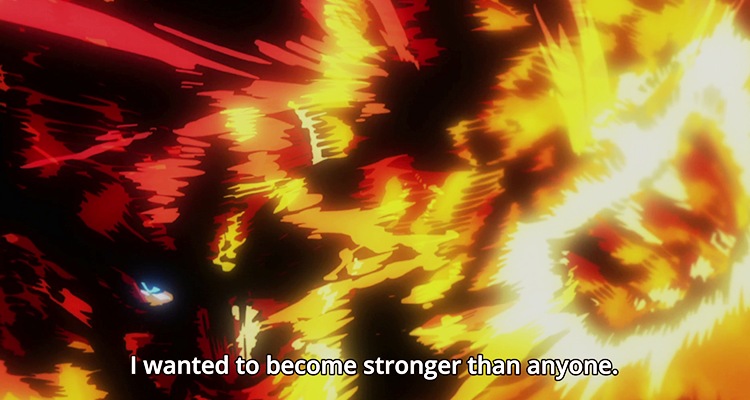 The final episode of Boku no Hero Academia (My Hero Academy) Season 4 comes to a close with an explosive bang, featuring the battle between Endeavor and Hawks against a new type of Nomu known as a High Spec. It goes without saying that this article will dive into exploring Episode 88, so for those who haven’t watched this particular episode (unlikely as that is), there will be SPOILERS below.

Anchored around the story of the now-number one hero, Endeavor, there can be a lot to unpack in such a short time within the episode. The episode brings back to the fore how Endeavor was as a father and husband, creating a dysfunctional family because of his single-minded drive to become or produce the top hero. Authoritarian and focused on results, his actions eventually split his family and caused his own wife to develop severe psychological trauma. Now, with the retirement of All Might and the shifting dynamic between him and his “prized son”, Shoto, Endeavor‘s tunnel vision towards the top spot was removed and he is forced to confront the reality of his broken family.

On the somewhat more positive side, it explains why Hawks is acting in such a manner towards Endeavor. It shows how in this uncertainty, how Endeavor continues to stride ahead to shoulder the incredible burden of being the top hero and the symbol of heroes of the nation. It also shows how his awareness of how he essentially ruined what could’ve been a healthy family, and in his own awkward way is trying to figure a path forward.

Nonetheless, it is an utterly unenviable task, no matter how you look at it. Endeavor is clearly not a man of social skill and maturity, being harsh, driven, and focused on his work and status. And yet with the dawning awareness that was forced on him by changing realities, he has no choice but to make a decision on how to confront the world ahead. It is a world which his own previous actions had helped to create, where his choices had harmed his own family and left him the foremost person to carry a burden that is clearly beyond his ability.

If there is one thing that can be taken from Endeavor at this point, it is a surprising sense of humility. Beneath all the fire and bluster, his actions and words do prove that he knows he has been treading a path full of mistakes and errors. When compared to the incredible charisma and overwhelmingly powerful Quirk of All Might, his position as #2 is completely understandable. Yet, with his limited ability, he has chosen to move ahead and take on the consequences of his actions: that which left him with a dysfunctional family and with the top spot to shoulder the ‘Symbol’ of the heroes of the current age.

In this, I find some degree of encouragement. Because only when we come to admit the reality of things can we take the first step towards changing them. It is only in faith, hope, and love, (cheesy as that sounds) that we can find a way forward – something which in time will bear fruit for Endeavor – and perhaps something which we too can hold onto. Just like this ‘new’ and changing Endeavor, it is with a new heart (Ezekiel 36:26) of flesh that perhaps we can be a blazing light (Matthew 5:14-16) in this daunting and often fear-inducing world.