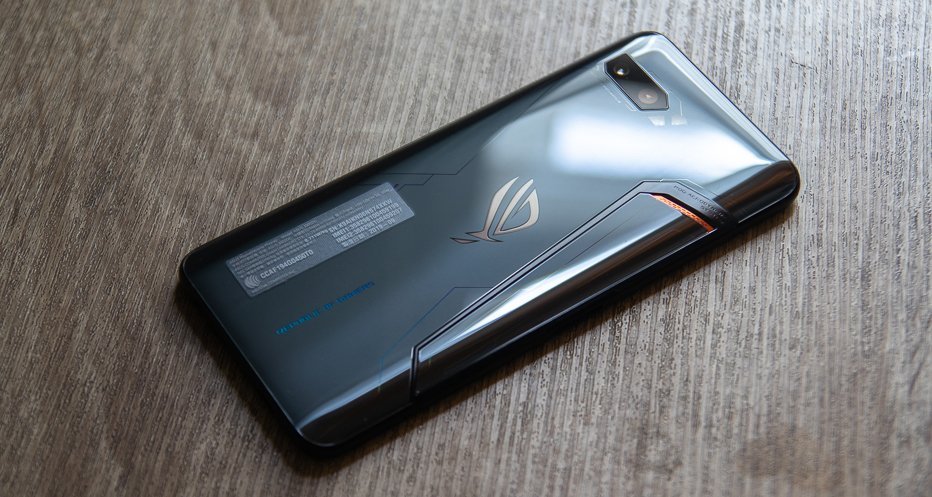 Is your smartphone outdated? Is your ROG Phone I not giving you the advantage it gave you when it first released? IS THERE A GAME YOU CAN’T PLAY ON YOUR CURRENT ANDROID PHONE? Doesn’t matter, we’re here to review the ROG Phone II from ASUS, and maybe, by the end of this, whatever your answer may be, wouldn’t even matter.

ASUS updated its entry to the gaming smartphone arena with the ASUS ROG Phone II. It still has the wide selection of ROG accessories with a couple of new ones for an unparalleled gaming experience. You can also hook it up to your big screen for greater immersion, taking Android gaming to the next level.

I love what they did with the ROG Phone II compared to the first generation. This phone is thinner and easier to operate with one hand. There’s a thinner bezel at both the top and the bottom and the brightly colored orange speakers of the OG ROG Phone is toned down making it less distracting. It’s quite taller too with its 6.6” AMOLED 2340×1080 pixel screen. I should note that the AMOLED panel on the ROG Phone II is one of the best in a smartphone. You can set it between 60Hz, 90Hz and 120Hz. It has a response time of 1ms with 10-bit HDR for vibrant and accurate color reproduction. It’s also protected by the latest Gorilla Glass 6 from Corning, which claims to be twice as tough as its previous iteration. Another welcome change is the implementation of an under-the-glass fingerprint scanner. The scanner is fast and you’re on your home screen in no time.

Nothing much to see on the front except for the 2 side firing speakers on the top and the bottom and the selfie camera. The selfie camera touts a 24MP f2.2 lens. It’s perfect for if you want to stream your mobile games directly from your phone, which you can definitely do thanks to Game Genie. Game Genie gives you the option to stream directly to YouTube and Twitch. No news yet on when it’ll support streaming on Facebook. Then again, you’re on Android, there’s definitely an app for that. 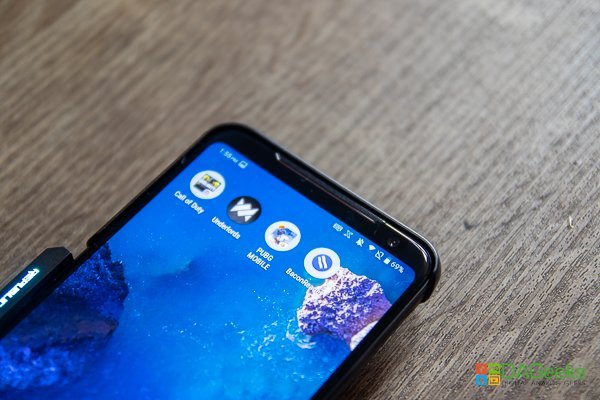 On the connectivity front, nothing much has changed since the ROG Phone. On the left, you’ll see the familiar slot for the AeroActive Cooler II. The included AeroActive Cooler is an upgraded design which ensures up to 5C cooler surface temperature with 4x quieter fans. It’s also designed to fit with the new AeroCase to protect the bumpers and back side of your phone from accidental bumps and falls. The right side of the phone gets busy with the volume rocker, power button and the 2 AirTriggers at each end. Underneath the phone, you’ll see the charging port and a 3.5mm. 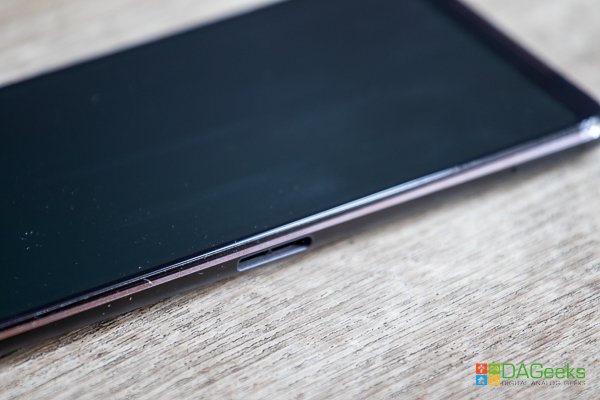 Flipping it over, we see the ROG logo in its RGB gloriousness. The back looks a lot cleaner with the faux copper getting trimmed to just a teeny strip compared to the first gen. The fingerprint scanner is gone too as the ROG Phone II now has it under the screen. The dual lens featured are both great for taking pictures in broad daylight. It sports a 48MP f1.8 26mm-equivalent lens with laser autofocus. And the ultrawide-angle lens, which I love, comes with a 13MP sensor at F2.4 with an 11-mm equivalent focal range. This ultrawide lens is perfect for cityscapes and landscapes. Now since this is a gaming phone, I won’t focus much on the aspects of the camera, but I should say that the ROG Phone II’s camera will not disappoint when you bring it to your travels. 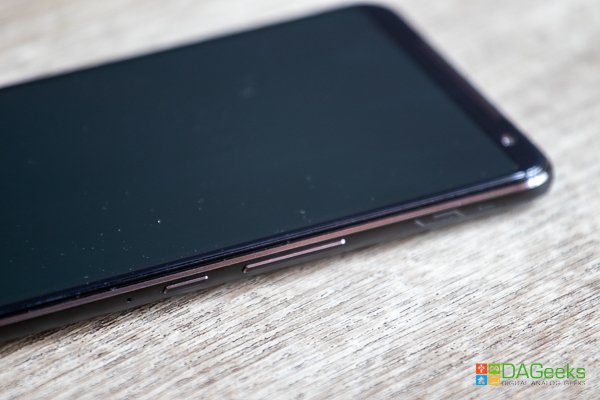 The dual lens featured are both great for taking pictures in broad daylight. It sports a 48MP f1.8 26mm-equivalent lens with laser autofocus. And the ultrawide-angle lens, which I love, comes with a 13MP sensor at F2.4 with an 11-mm equivalent focal range. This ultrawide lens is perfect for cityscapes and landscapes. Now since this is a gaming phone, I won’t focus much on the aspects of the camera, but I should say that the ROG Phone II’s camera will not disappoint when you bring it to your travels.

The ROG Phone II comes with all the bells and whistles you’d expect from a flagship gaming phone. Powering its core is the Qualcomm Snapdragon 855+ clocked at 2.96 GHz and the Adreno 640 which can help you take advantage of the 120Hz panel by running your games at 120 FPS. There’s a lower 8GB version, but the ASUS Philippines website only lists the 12GB variants and that’s more than plenty for your smartphone needs. There’s plenty of storage to go around as you can buy the 512GB variant as well as the 1TB one. A terabyte, really. With the options that’s being offered, there’s no need for a microSD card. Not that you have a choice though because it doesn’t have a slot for expandable storage. 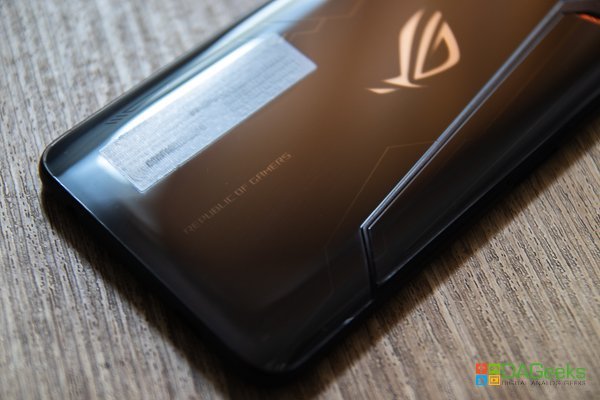 With its top of the line components, 6.6” AMOLED screen, you must be thinking of what powers this thing. ASUS upped the ante by fitting in a 6,000mAh battery with Quick Charge 4.0 support, giving you more time with the device unplugged from your favorite socket wall. Speaking of unplugged, the powerful multi-antenna system ensures rock solid connectivity whenever, wherever there’s a signal, delivering up to 1.2Gbps of 4G LTE connection and 4.6 Gbps of Wi-Fi speeds with WiGig, provided that your router can keep up with such demand. Now you can definitely say that the ROG Phone II is definitely a heavyweight, metaphorically and literally. This phone is a bit on the heavy side coming in at 240 grams. You’ll have no problem when playing with two hands in landscape mode, but when you try to hold it with one hand in an upright position, you can definitely feel the heft. That being said, the dimensions on this phone are perfect. It’s tall but not too wide and definitely on the slimmer side of things.

Improving on the already great ROG Phone, the ROG Phone II doesn’t and shouldn’t disappoint, really, when it comes to gaming performance. Equipped with an all new Armoury Crate software, the ROG Phone II ensures that you squeeze every bit of performance out of your phone. Inside Armoury Crate is Game Genie, which will give you everything you wish. Don’t want to get disturbed with phone calls while using your mobile data? Game Genie has a Data-only feature which disables your SIM card’s call function. You can also disable notifications for messaging apps or any other apps for even lesser interruptions. If you also find the battery life lacking, you can easily swipe down and change the screen refresh rate, which will undoubtedly increase your battery life, with just a few taps. Game Genie will also help you share your gameplay to the world with its built-in streaming function. Go live with just a few taps, anytime, anywhere. And if you’re in a place with no reception, you can always record your gameplay and share at a later time.

Two buttons separate the ROG Phone II from the pack. Two buttons to rule them all. I have two buttons, the left and the right, okay I’ll stop. The AirTriggers is just that good. It easily gives you an unfair advantage over others as you can use 2 extra fingers for more precision and control as opposed to just using 2 thumbs. But that’s not all, more than tapping the AirTriggers, ASUS gave the AirTrigger an upgrade with 3 unique ultrasonic touch sensors. You can now perform a slide gesture which you can setup per game and a dual vibration feature which provides quick and satisfying haptic feedback.

Looks like ASUS read our review of the first ROG Phone. Last time I said, that even for a 6-inch device, the immersion is surreal. Well, the ROG Phone II treats our eyes beyond awesome with its 6.6-inch screen. Playing fast-paced shooters or racing games is such a delight with this phone. There are fewer frustrating firefights in Call of Duty Mobile and PUBG, and the visual treats of Asphalt 9 for that adrenaline rush of overtaking your opponent.

The front-firing speakers are loud and clear. It’s enough to fill a small room and the quality is crisp and balanced. Perfect for watching YouTube videos while cooking. Yes, such an adult thing to do. It’s perfect in the kitchen really. No kidding. Following cooking shows and such. It’s also very useful in gaming as it gives you perfect stereo imaging, giving you a sense of where sounds are coming from inside your game. It also gives you clear comms with your teammates with its noise-cancelling quad-mic array. Having played with in-game chat and Discord, my teammates noted that they hear me clearly with minimal background noise.

Again, building on the vast array of accessories available for the ROG Phone I, the ROG Phone II is compatible with a couple of the previous gen expansion. They upgraded some accessories though such as the TwinView Dock II, which transforms the ROG Phone II to kind of like a Nintendo 3DS, giving you the ability to stream with 2 screens, a Discord chart on the other and also gives you an extra 5,000mAh of juice.

If you’re the sort that needs to have tactile feedback when playing, the ROG Kunai got your back. The Kunai is made up of 3 modular components, a bumper, the controllers and the holder. Much like a Nintendo Switch’s Joy-Con, the Kunai controllers can be combined to create a standalone control. The WiGig Display Dock goes well with the theme of going wireless. Stream your game wirelessly to your living room TV with nothing but Wi-Fi, without the input lag. If you prefer to be tethered to your TV with a cable, you can opt to purchase the Mobile Desktop Dock which gives you capabilities to connect even to a 4K monitor.

With the aesthetic upgrades and a bigger battery in a more compact body, if I didn’t have a working phone right now, I just might snag one for myself, for Christmas. I know last time I said, the OG ROG Phone would be a tough sell as more popular Android games are being catered to midranged devices, but there are newer games coming out with options to enable higher quality display settings, giving the beefier flagships a reason to have all that power. Again, we’d love to see developers try and push mobile gaming to the limit. Who knows, maybe years from now, your Steam library can be run from your own device that you can fit in your pocket. Given where flagship phones’ introductory prices are right now, the ASUS ROG Phone II is a steal at 49,999 php for the 512GB/12GB variant.

The ROG Phone II is definitely on top of its class with its specially-binned SoC, 12GB of RAM, 512GB of storage and 6,000mAh of battery. The wide selection of available accessories makes this phone a must-have if you’re a serious mobile gamer. Its custom OS is specifically designed with gamers and streamers in mind. You can shut off the world around you with a tap and go full-on gaming mode with nobody to interrupt your gaming sesh. I’m giving this phone an almost perfect score because definitely, ASUS can figure out things to improve for the next iteration. 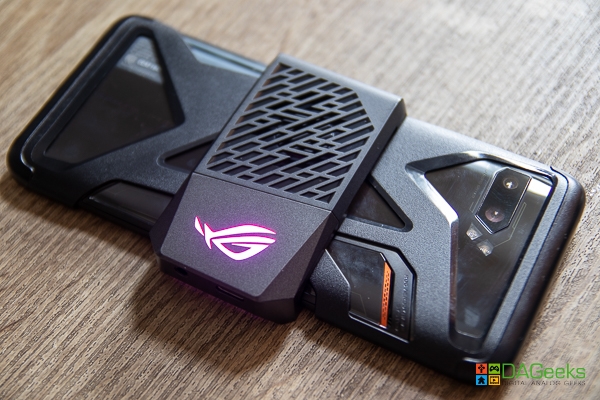