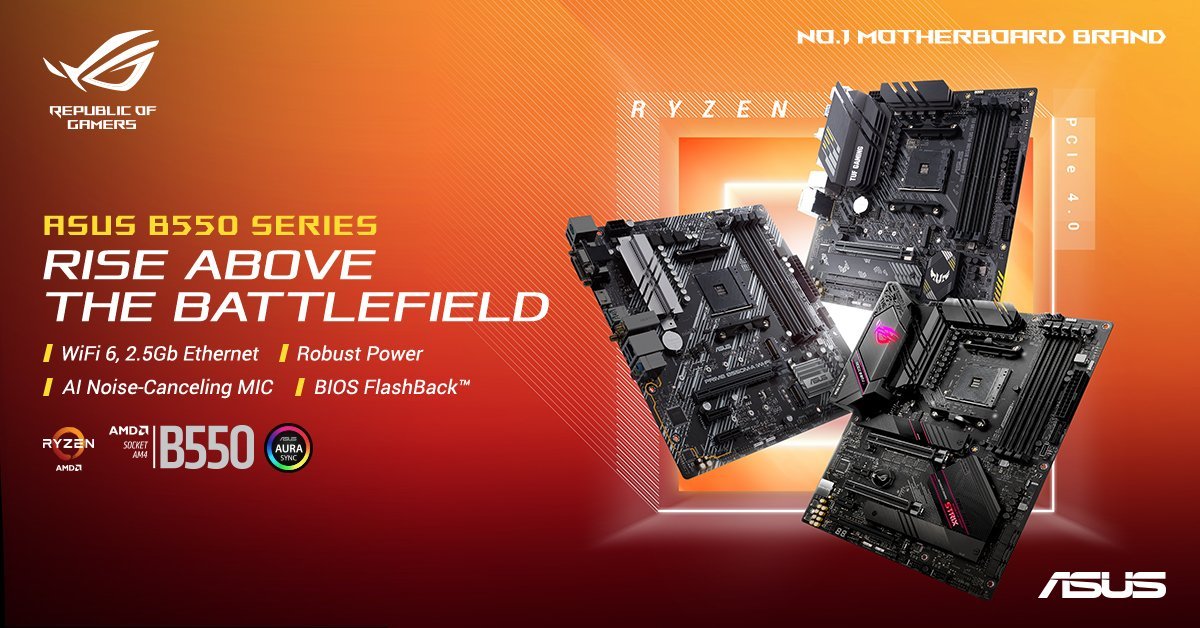 ASUS announces their latest AMD B550 motherboards that bring PCIe 4.0 to the consumers. The AMD B550 chipset enables 20 lanes of general-purpose PCIe 4.0 lanes from the 3rd generation of AMD Ryzen desktop CPUs. The primary PCIe slot on new ASUS B550 boards offers 16 lanes of PCIe 4.0 connectivity and 3rd gen AMD Ryzen CPUs feature as many as 4 USB 3.2 Gen 2 ports running at speeds of up to 10 Gbps from the CPU itself.

The ROG Strix and TUF Gaming B550 lineup features AI noise-cancelling microphone software, perfect for those who plan to stream and don’t have yet a budget for high-end audio setups. Supporting 3.5mm, USB or Bluetooth headset, the software takes advantage of a massive deep-learning database to preserve the quality of the user’s voice while eliminating distracting noise from mechanical keyboards, mouse clicks and environmental noise.

There’s a total of 11 SKUs across 3 different tiers. ROG Strix boards dominate the high-end and is still the flagship models with features like top-of-the-line VRMs, enhanced audio, 2.5 Gbps Ethernet and Wi-Fi 6 connectivity. TUF Gaming boards are your mid-ranged models with features like robustness, reliable and budget friendly packages. And rounding up the series are the Prime boards as your entry-level with all the necessary features for your all-around budget build.

If you plan to build a high-end gaming PC with AMD‘s high-performance processors and plan to install up to 3 GPUs, the ROG Strix B550-E Gaming is the board for you. This board’s AM4 socket is equipped with a 14+2 power stage VRM for reliable and stable power delivery even under heavy load. The reinforced PCIe x16 SafeSlots support multi-GPU, be it NVIDIA‘s 2-way SLI or AMD‘s 3-way CrossFireX for hardcore gamers and demanding creators.

If you need a Wi-Fi capable board, then you might want to check the ROG Strix B550-F Gaming (Wi-Fi). It’s equipped with the latest Intel I255-V 2.5 Gbps Ethernet port and Wi-Fi 6 support from an Intel AX200 adapter, which also supports AX connectivity for superior wireless connectivity. This board has a 12+2 power stage VRM and an 8+4-pin ProCool aux power connectors to ensure steady and stable power delivery at different power stages using top Ryzen chips.

Small form factor PCs are becoming more mainstream now and as such, there are different components available already in the market for this segment. The ROG Strix B550-I Gaming is true to the saying that big gifts come from small packages as it can drive compatible DIMMs at speeds of up to 5,100MHz and beyond by taking advantage of its form factor, thus lessening the trace length between the memory slots and the CPU. It has an 8+2 power stage VRM which is good for the 3rd generation AMD Ryzen chips with active cooling and ProCool II design for stability. This board is packed with a lot of I/O including USB 3.2 Gen 2 Type-C and Type-A ports, an Intel I225-V 2.5 Gbps Ethernet port, an Intel AX200 Wi-Fi 6 adapter and Bluetooth 5.1 capable. The 3.5mm connectors are lit by LEDs to allow for easy identification when plugging in your headset, microphone or speakers. There’s also a noise-filtered USB-C audio port for compatible headsets/mics.

If you’re looking to get the most out of your budget, the TUF Gaming line is here for you. The TUF Gaming B550-Plus features 8+2 DrMOS voltage regulator module and ample-sized heatsinks covering the VRMs, chipset and M.2 slots to make sure that these components are running optimally cool under heavy load. The main PCIe 4.0 x16 slot is backed by SafeSlot reinforcement for extra-heavy GPUs and a ProCool aux connector offers stable power when using power-hungry GPUs.

There are 2 110mm M.2 slots and 2 PCIe x16 slot which supports CrossFireX configurations. The I/O panel includes USB ports of every modern type and it comes with a header for Thunderbolt 3 connectivity for that extra peace of mind. It also comes with a BIOS FlashBack button for CPU-less BIOS modifications.

The TUF Gaming B550-Plus comes with 2.5Gbps Ethernet and there’s an M.2 E-key slot for users to be able to upgrade to a Wi-Fi 6 and/or a Bluetooth adapter. It’s also fitted with a Realtek S1200A audio codec and with DTS Custom support for headset 3D surround-sound virtualization, giving gamers the edge with positional audio.

It has the military look gray-and-black aesthetic of the TUF Gaming series over the past years and has yellow accents distinctive on its own. It also has a Gen 2 addressable RGB LED header and 2 standard headers that can be wired to extra strips if you ever wish to do so.

This is the smaller brother to the TUF Gaming B550-Plus, given its smaller microATX form factor. It has the same pair of PCIe x16 and M.2 slots as its big brother. The main difference is the other M.2 slot takes in a standard 80mm versus the 110mm of the B550-Plus.

This model comes in 2 variants, one with the Intel AX200 Wi-Fi 6 and Bluetooth 5.1 connectivity and the one without. Don’t fret though as both of it has 2 Gbps Ethernet connectivity and a blastin’ Realtek S1200A Audio with DTS custom support. 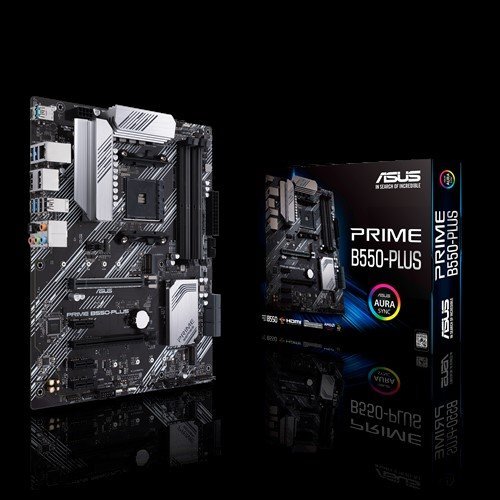 If you need a basic board for standard daily tasks and need it to not be expensive, the ASUS Prime line is here for you. This model is the top-of-the-line of the series and will serve you well as a midranged gaming rig paired with the right components. This is a perfect pair for midrange AMD Ryzen chips and comes with heatsinks on the VRM and chipset to ensure optimum operating temperature.

It has dual PCIe x16 slots that support CrossFireX and 2 M.2 slots that can both accomodate 110mm drives. This is the underrated series of motherboards in the gaming industry.

If you want to build a basic small form factor PC with Wi-Fi capability, the ASUS Prime B550M-A (Wi-Fi) offers the same specs of the Prime B550-Plus in a microATX form factor.

This board only has Gigabit Ethernet but the Wi-Fi 6 capability makes up for it with the Intel AX200 Wi-Fi 6 and Bluetooth 5.1 adapter.

If your budget is really tight, along with your space for an ATX build, the B550M-K might fit your bill. This is a compact motherboard that doesn’t sacrifice expandability with its features. Its main PCIe x16 slot and M.2 slot are wired directly to the CPU for maximum bandwidth with compatible devices.

There are 2 M.2 slots available, with only one of them being 110mm. There are also 2 USB 3.2 Gen 2 ports along with 4 USB 3.2 Gen 1 ports, plenty of I/O connectivity with plenty of bandwidth. It also supports a variety of monitor connections with its HDMI, DVI-D and D-sub ports if you plan on using integrated graphics.