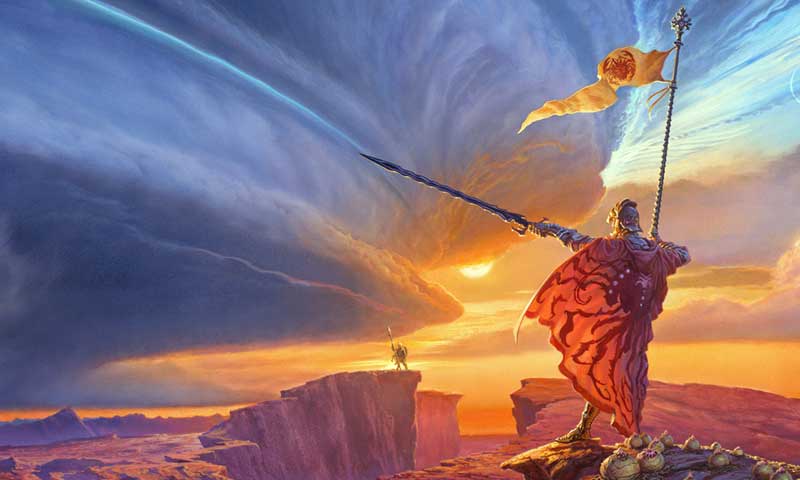 The Way of Kings

The Way of Kings is an epic novel written by Brandon Sanderson. To those unfamiliar with Brandon Sanderson, he was the author tapped to finish the Wheel of Time epic, originally written by Robert Jordan. He is one of the most prolific authors of this generation, producing multiple best-sellers in the fantasy genre, including the Mistborn novel series.

Way of Kings is highly focused on a small number of characters, all of who play a critical role in the unfolding apocalypse which is hinted at in the introduction. It does use multiple perspectives, slowly drawing the major members of our cast together towards the end, but also featuring the viewpoints of various other characters scattered throughout the world of Roshar.

You see that the story is set heavily on what has gone before in ancient times – a theme that Sanderson has used before with Mistborn. Lost knowledge and powers return to those who might bear them, to help save mankind and Roshar from the coming storm. With the saga named the Stormlight Archives, it is no surprise that the concept of the storm is used heavily in both metaphoric and literal senses throughout the story.

The characters are highly distinct, each with their own clear strengths but with clear struggles as well. It is here that we see another common theme used by Sanderson, wherein race and class differences are highly prevalent. The society reflected is a decadent one, where the most powerful nation is in a state of moral corruption, led by men of similar thought. Gender roles are explored, where men are tasked to do things on the field of war and craft, and women control literacy and the intellectual arts.

Another hook in Sanderson’s work is the presence of magical artifacts known as Shardblades and Shardplate, weapons and armors respectively of great power and might. These unique items give their bearers a huge, but not insurmountable, advantage on the field of battle. Shardblades, by their ability to cut through anything almost instantly except Shardplate, and Shardplate for their ability to greatly empower and enhance the strength and speed of men.

What fascinates me is the threading of an author’s philosophy in their writing. Sanderson’s own tends to be highly pragmatic, though aspirant of traditional (Western) noble values and virtues. This is obvious in the presence of the book The Way of Kings, which is a treatise written by an ancient king, and being read by one of the principal characters.

After reading webnovels and light novels, being able to get into such a rich universe such as the Stormlight Archives was a delight. The deep world building of Sanderson is as skilled as ever (having read Mistborn) and this is clearly where his strength lies. His characters are both frustrating and worth cheering for, in their own rights, which shows his ability in creating people we can connect to.

Certainly, a high recommendation for anyone interested in epic fantasy stories.