For those looking to get a bit more competitive with their DC Deck-Building games will have a treat as Cryptozoic Entertainment is finally releasing the Organized Play kits for the game sometime this year (summer of 2017).

The OP Kit will contain instructions for retail stores to run tournaments, as well as prizes for participants for those participating. Cryptozoic will be launching the kits alongside the DC Deck-Building Game Multiverse Box that we reported last month.

Priced at 25 USD (estimated: 1,250 PHP) the kit will contain instructions that outline various options for tournaments (Single Elimination, Point-Based) and league play (Competitive League, Cooperative “Crisis” League). The kit will also contain suggestions for how to set-up tournaments depending on the number of players, market the tournaments, and even utilize the included limited-edition Playmat and 12 Vixen Super Hero Promo Cards as prizes. The kit will also contain a poster of DC’s Vixen to encourage players to sign up for an upcoming tournament.

Here’s a look at the playmat included:

Meanwhile here’s a look at the DC Vixen’s promo card: 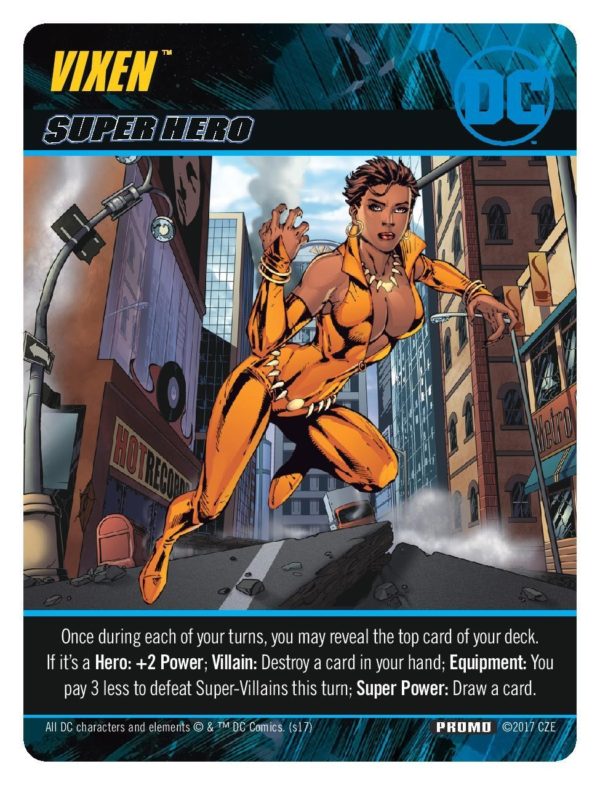 The news update also reports that Cryptozoic and Warner Bros. Consumer Products plan to release kits biannually. And that future kits will have the same content but with a rotating set of promo cards. So expect the Black Lightning promo card to come along with the late 2017 OP Kit.

Also the update mentions that,

Starting this year, players at Gen Con will have a chance to preview and win the following year’s DC Deck-Building Game Organized Play Kit Promo Cards before their wider release to stores via the kits.

Currently, I am trying to find out if our local retailers will get the OP Kits and have them implement the system locally. But as of this post I have not gotten any word yet of the adoption.

Update: 03/17/2017 – We got word that Gaming Library will be running multiple instances of the upcoming DC Deck-Building OP Kits. And according to Gaming Library VP for Marketing, Organized Play and Customer Service:

I can confirm that Gaming Library will be getting and running multiple instances of the D.C. deckbuokding organized play kits. Interested stores should contact Gaming Library about how to be a part of it. Kits aren’t produced yet, by Cryptozoic, but we’ll have it as soon as they roll it out