Everyone goes through breakups. Some handle it better than others, moving on and even managing to become better versions of themselves thanks to the experience. There are those, however, that fall into slumps that make you genuinely concerned about how they’ll pull themselves out of it. WWE 2K20, the latest installment in the long-running series that has seen its fair share of ups and downs throughout the years, fall in the latter camp. And this breakup you ask? It’s between 2K games and Yuke’s, the latter of which has been behind these games since WWF SmackDown on PlayStation. For this installment, Visual Concepts, who are better known as the folks responsible for the NBA 2K series take the reins, and the results haven’t been parts frustrating and parts nightmare fuel, if all the Twitter clips are to be believed.

Well, let’s get the obvious out of the way. WWE 2K20 is an ugly game. One of the promises that came with 2K Games taking over when THQ went under is that the WWE games would get that 2K Sports sheen and attention to detail present in NBA 2K. It strikes us as odd that Visual Concepts and 2K Games would cut corners so badly in the visuals department, especially this late in this console generation. The entire roster looks like bad off-brand versions of the larger-than-life personalities they’re based on. It’s as if someone just slapped various parts and outfits on the same default template Create-A-Superstar and called it a day. Speaking of creation modes, we’ll get to that in a bit.

Now for a bit of disclosure:my personal experience with this series going all the way back to the PS2 days with Shut Your Mouth and a huge chunk of my time spent in these games goes to its Create-A-Superstar mode. Just like the overall experience of the games, this mode has also been through its own ups and downs, with wild fluctuations in terms of its flexibility and its output. 2K20’s iteration of this mode remains largely unchanged from the last couple of installments, with a few convenient additions here and there. I’d dare say it’s one of the more stable modes in the game. The true horror, however, comes when the game has to render your creations in-ring. Parts and features come out wrong when you’ve clearly placed them as intended, colors get mixed up, and a myriad of clipping issues that weren’t there during the assembly process are just some of the annoyances you’ll come across.

So how about the wrestling itself? This is where it mostly goes downhill. For a formula that’s been around for about two decades at this point, we didn’t think it was possible to mess it up even further, but Visual Concepts actually managed to do it. Not quite sure if they deserve an award, but it’s quite the feat nonetheless. The control scheme got needlessly rearranged, switching your strike and grapple buttons for absolutely no good reason, and they feel more sluggish than usual. It’s during matches where most of the glitching occurs, and though some recent updates managed to fix some of those, some still manage to find their way through the cracks. You’ve got objects mysteriously sinking into the ring, wrestlers contorting into horribly unnatural positions during grapples, the ring itself turning into an eldritch horror, and other kinds of YouTube/Twitter fodder.They’re good for a laugh or two, but when you really just wanna sit down and play a wrestling game, it can be frustrating.

It’s clear that Yuke’s was the glue holding this particular series of WWE games together since the beginning. With them moving on to greener pastures and developing a new wrestling-related project, Visual Concepts’ first showing isn’t a promising one. As of this writing, some patches have been released and initially missing modes like Create-A-Championship are back. Given that WWE 2K20 showed a fair amount of promise in the lead-up to its release, what with its 2K Originals and the return Showcase Mode centered around the Four Horsewomen, this is as botched an entrance as it can get. Visual Concepts was hoping to get its big push with this one, but pretty much buried itself in the process. 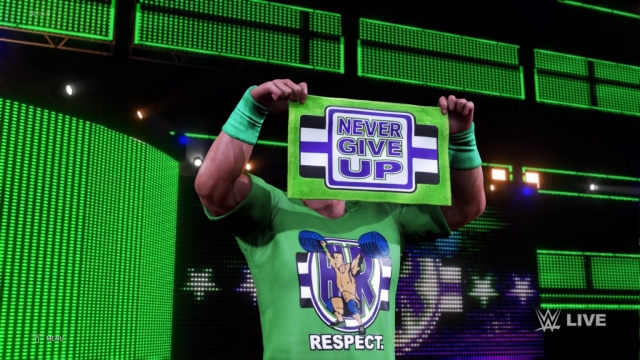