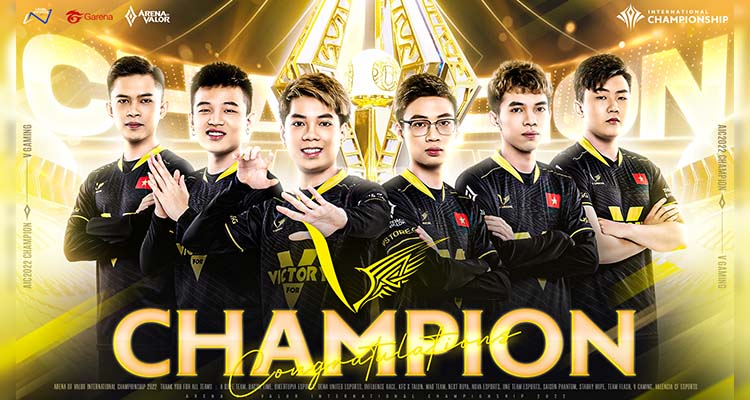 The Vietnamese team dominated the finals match with a score of 4-1. Taking home the lion’s share of the $2,000,000up for grabs.

A joint effort between Garena and Level Infinite, the AIC 2022 brought together 16 teams from across 10 regions to compete for the prestigious title.

VGM’s journey to championship was not an easy feat. After losing 1-4 to ONE at the Semi Finals, VGM continued to showcase exemplary teamwork and skills to secure a spot at the Grand Finals. With their unyielding spirit and confidence, V Gaming eventually emerged victorious against ONE with a score of 4-1, raising their first-ever champion trophy at the Arena of Valor International Championships.

VGM’s Maris was named the FMVP of the Tournament, bagging himself $30,000 in prize money.

In celebration of Arena of Valor’s exclusive annual brand festival – AOV Day: Dimension EDM Festival, players in the Garena regions can immerse themselves in AoV’s themed music and look forward to exciting in-game rewards and exclusive skins in collaboration with various local celebrities. In addition to the series of events released since 10 July, players can also expect to receive more special rewards when they login in on 24 July!

You can download AoV on the Apple App Store or on Google Play Store.