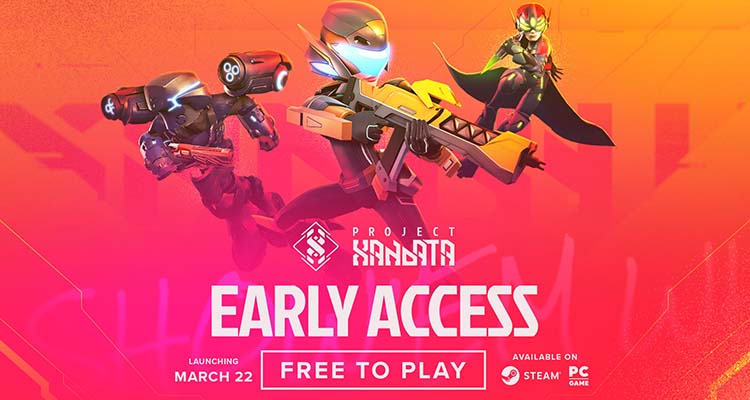 Project Xandata – Get Hyped, Get Sweaty

Project Xandata will be released on March 22, 2022, on Steam and is currently planned to remain a PC-only title for the time being. Its main competitive mode will be made available at a later date, but its other quick-play and arcade modes will be available at launch.

While Project Xandata’s game design takes notes from Quake, Destiny, and Halo, it takes a different approach to most other FPS games through its art direction, drenched with Filipino-imbued culture, names, and background. Its visual design also absorbs motifs and color palettes from the 90s—an era looked back on fondly by many Filipino gamers—with Product Manager Mig Sevilla citing Mega Man as an inspiration for the game’s art style.

Gene Gacho has also emphasized the team’s desire to steer away from the precedent set by other popular FPS games on the market right now by choosing to develop a class-based shooter rather than a hero shooter. While there may be named characters in the world of Project Xandata, Gacho explained that the goal is to make players feel like they ARE their Xandat, letting them find their place in the world of the game.

Smaller clusters and higher stakes were top-priority when designing the game’s team dynamics, according to Gacho.

5v5 felt that like you could hide behind some of your stronger teammates actually and let them carry you. But in 3v3, it feels more like, if someone dies on your team—I’m talking about the competitive mode where you can’t respawn—losing 1 person in a 3v3 feels much more impactful than losing 1 person in a 5v5.

Gacho also mentioned the capacity that last-man-standing players have for clutches in a 1v3 as against a 1v5, where they may easily get overwhelmed in the latter.

As a new FPS game breaking out onto the market, Project Xandata is expected to be ready to overcome the common hurdles of most FPS games, especially for players based in Southeast Asia. These include latency, cheaters, and toxicity. According to Gacho, a lot of research was done on finding good servers that deliver decent ping no matter where players connect from. He says they’ve Found a good match that services the needs of the game for the players.

All chat between teams is disabled in the game’s current state in order to minimize toxicity. Enemy players will only be able to flex and style on defeated opponents through visual gestures at the end of each match. Swear filters are also enabled at launch.

Project Xandata will also be launching with Easy Anti-Cheat.

Based on our experience so far as players of first-person shooters, it’s kind of hard to completely curb toxicity and [comb] through your playerbase. Our approach, at least right now, is really more community-based where we just really need to pay attention to how our players interact and just be on top of things in general. We ARE also working on systems that would hopefully help us monitor these things a lot better.

Project Xandata’s status as a title geared for esports is entirely dependent on whether or not the player base wants it to be, according to Secret 6.

Despite this, Gacho has stated that Secret 6 is open to an organic, grassroots approach to growing an esports community for Project Xandata post-launch should there be demand for it. Custom game modes for tournaments are allegedly being implemented but will not be made available to the public according to Sevilla. Events organizers will have to contact Secret 6’s marketing team in order to host Project Xandata tournaments.

In terms of where we want our playerbase to be, we want them to actually constantly queue in the quick-play ladder or the arcade modes or even the competitive mode—the ranked mode—when it’s released.

This all sounds amazing, but how does the game feel? During Project Xandata Combine, we got the chance to queue against and face the developers themselves in an early press build of the game. Being a VALORANT player with a preference towards strats and executes, I have had minimal experience with movement shooters in the past, having only played Team Fortress 2 and Star Wars Battlefront II Classic extensively. My typically methodical and calculated playstyle was subsequently curb-stomped by the devs, who tenderized my rear buns and served them back to me on a platter, freshly seasoned and grilled. It was a beatdown, but man, was it a good beatdown.

Project Xandata’s gameplay feels fluid and gunplay is reliable (even when my dexterity isn’t). Maybe it was just the coffee I had that morning, but being thrown into matches against the best of the best got my blood pumping and nerves tingling. Loading into maps I’ve never been in before will always be overwhelming to me, but the fun I had blasting my trusty Amorsolo revolver was well worth that price.

The game’s aesthetics bring across the fun, Futuristic Filipino feel the devs intended excellently, despite the early build’s lack of overall visual polish. I will always be an advocate for gameplay over graphics, and Project Xandata delivers the gameplay well. It may be overwhelming for new players, but the adrenaline hits different for everyone.

However, while playing, I felt like there were still many aspects that required tweaking and polish. For one, the game’s sound design and audio as a whole felt somewhere between underwhelming and intrusive. Simply put, the game lacks some punch and energy in its sound design that leads to an audibly floaty overall experience. The sound effects are by no means bad—the Agent class’s BFK sounds awesome and the UI sounds crisp—but I found it lacking for my personal taste. The in-game announcer got very annoying very quickly, with long voice lines that attempt to add personality but made me want to tune her out even more. Simple “Battery dropped,” or “Team wipe!” announcements with occasional spicy one-liners would be preferable to a constant barrage of sass that distracts from the game itself.

The game’s title, trailer, and in-game music tracks were also underwhelming for me, especially as an electronic music producer that grew up loving Wily Fortress 1 from Mega Man 2 on the NES. I could hear the Mega Man style rock influence in-game, but the only thing I could remember about it afterward was joking about how it sounded like Ludwig Göransson’s “The Mandalorian” but on a 90s synthesizer preset kit. Project Xandata’s music could’ve been so much better given its blend of sci-fi, magic, and Filipino culture, but it fell flat for me.

It was also difficult to tell enemy players and teammates apart without the help of HP Bars and team markers. I’m by no means colorblind, but the translucent red and blue overlays respectively became challenging to recognize at medium to close range. Moment-to-moment gameplay was confusing as a result. Lastly, I personally found it difficult to manage ammo and cooldowns due to the small size of the HUD indicators. Scaling them up to be more readable at a glance would be a great tweak. But despite these early-game gripes, I can say with pride that Project Xandata is a remarkable display of what Filipinos are capable of in the video game industry. I am excited to see where this project goes and wish all the best for Secret 6 and their passion project.