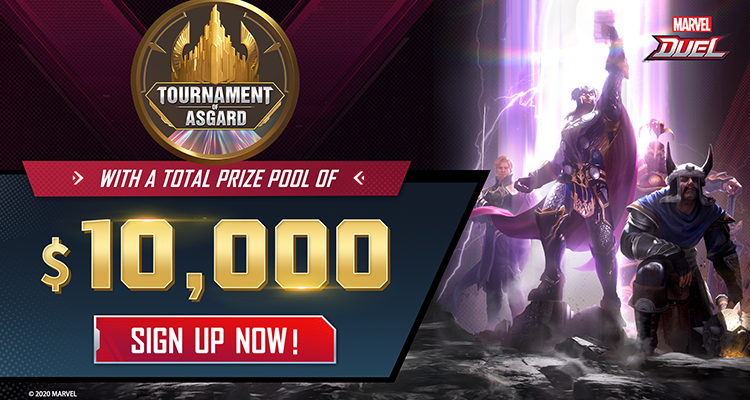 After its Southeast Asia release, strategy mobile card game MARVEL Duel will take things to the next level of competitive action with the Tournament of Asgard. This open player tournament will be the very first MARVEL Duel competitive event. Rewards include a prize pool of over $10,000, exclusive card backs, and over 1000 General Card Packs for give-away.

If Players possess the strength of Thor, the cunning of Loki, or the wisdom of Odin; they may enter the competition for the title of champion, with registration opening for 144 players starting September 4 through to September 17.

In the tournament, the winners will be rewarded as such, 1st place taking home $4,000; 2nd $2,500; 3rd $2,000; and 4–6th place $500. An exclusive card back will be granted to the top 12 and the reward for champion will be worthy of the title: a one-and-only [Asgard Champion Emoji], showing the skills of a true MARVEL Duel master! After the final, the three top players will play against the dev team in the Dev Team Challenge Showdown.

To register for the Tournament you can follow this link.