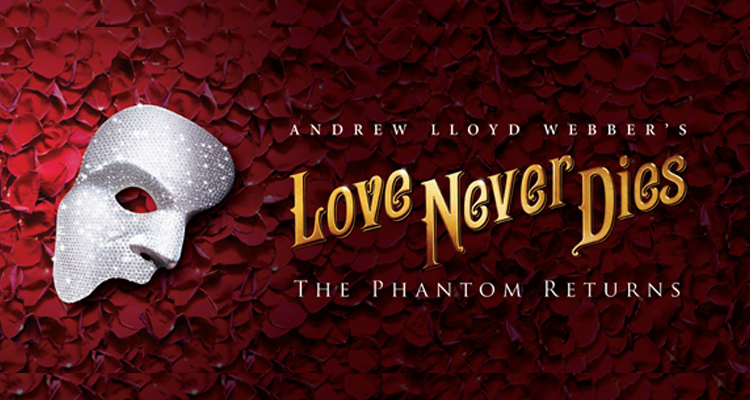 Hi, geeks! I’m back to regular programming, with a theatre article. So let’s hit pause on Filipino film reviews – for now, at the very least.

The Show Must Go On, a recently established musical theatre YouTube channel, streams new musicals every weekend. The catch is, each musical is only up for 48-hours. In the time of community quarantine, it’s a great initiative. One, it hopes to raise money for The Actors Fund: COVID-19 Emergency Relief. Two, it brings world-renowned productions closer to homes. Three, it introduces the arts to those would not have thought to be so interested in it.

For the past weekends, since community quarantine began all over the world, the channel has aired a lot of amazing productions – perhaps, some would not have even dreamed of watching them. As of this moment, TSMGO shared four of Andrew Lloyd Webber’s works. Opening with Joseph and the Amazing Technicolor Dreamcoat, and now it recently streamed The Phantom of the Opera, Love Never Dies.

I will go directly to the point here. Despite his numerous awards, Webber, in hindsight, is human. Maybe he has his ships, and maybe just as any shipper, some of his ships don’t sail. He might not have been happy with that setup just as Frederick Forsyth was. So he and his co-writer decided, “Hey, let’s do The Phantom of Manhattan! ” – which is the indirect sequel and ode to the original Le Fantôme de l’Opéra. As a result, we have LND! Tada!

Production-wise, I appreciate the use of the revolving set pieces and the glass boxes. However, it’s not as extraordinary as POTO’s. POTO’s architectures are so immersive that it takes audiences into another world, even if it’s just seen via a screen. There are genuine genius and story in its design that I’m pretty sure anyone seeing it will be at awe. LND‘s, on the other hand, is as-is. Setting A, Setting B, and the stuff actors need in each setting. It feels as though the investment in storytelling is left on the surface level.

Although, I must admit that I may have set my expectations a bit too high. The opening scene kind of set the bar for that. I mean, that epic drama of Opera Ghost on the piano with a large photo of Christine Daaé floating at the back? Come. On.

Musically, LND is amazing on its own. Unique from the genre in its predecessor with some notes nodding to the original scores. There are some songs that I will be jamming to, sure. But, as with the production design, the songs do not have the intensity and the immensity to drive the emotions. Even the titular song, Love Never Dies, didn’t do it. Though I may have to check on this again, I honestly feel as ‘Til I Hear You Sing had the most gravitas out of all the songs there. And it’s just about O.G.’s obsession with Christine.

On the libretto – it’s… a mess. The original POTO, to common knowledge, ended with Christine escaping from the Phantom with Viscount Raoul de Chagny – which is faithful to the original narrative. The fans accept that version because the entire story steered it that way, and – duh – it’s only right to close that way.

LND outright destroys all of those. The audience finds out early in the musical that Christine sleeps with O.G. sometime in the past, with timelines unclear and difficult to fit into the events of POTO. Even assuming it happens after the raid is questionable still. That’s only the crust of the list of questionable plot points.

The characters are another question. Yes, the 10-years leeway can be the excuse but the depth of that is hard to summarize into an hour or two. Why did Madame Giry and Meg become the way they are in LND? Why is dear, sweet Raoul suddenly a drunkard and a gambling lord?

Lastly, Christine dies (and needlessly too). This very twist destroys the great romance that POTO claims. One, there are two romances in POTO that are just thrown out the window: Raoul and Christine’s – how they conquer their challenges – and the O.G.’s ultimate sacrifice of letting Christine go. Two, this puts the theme of love in a dangerous position by romanticizing the idea that love should offer more thrills than safety and security.

I know that Webber mentions LND can be taken as a stand-alone piece. It could honestly have worked if the story itself does not deliberately throwback a lot of past elements. Add to the fact that POTO is too popular for anyone to not know how the two franchises can be connected.

Perhaps if it is made as an independent new piece, I would forgive it. Or if the characters retain tinges of familiarity to their originals, it would have been okay. Perhaps. However, I would be lying if I say I did not enjoy it. On the contrary, it’s entertaining.  As I’ve mentioned, the songs are something I’ll be listening to again. Also, as an O.G. fan (if he kidnaps me, I would stay), I’m happy to see a universe in which he is alive.

LND is slated to take the stage of The Theatre at Solaire, or was. In the chance that it is rescheduled to open in the country – or if anyone of you manages to catch elsewhere – my sole advice is: look with your heart – love is not always beautiful.