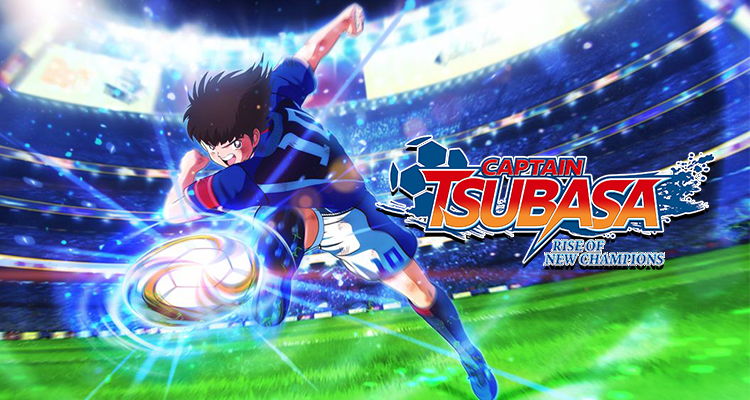 I get the popularity of sports video games (especially for most bro gamers), but I also understand that it is quite niche, since those who play sports video games usually just sports fans, to begin with. So it is quite the pleasant surprise to see Bamco try its hand at creating a sports game while doing what Bamco does best – tying it in with a popular franchise – this time being the football anime classic Captain Tsubasa.

You’d think with the yearly saturation of soccer games like FIFA and PES, you’d think putting another entry to the console football game on the table would be out of the question – but Captain Tsubasa: Rise of New Champions is actually quite a smart release. It doesn’t reinvent the wheel, but with the addition of the anime context – as well as some unique anime game features – the game does open the tired genre to a new market. It’s not the first to do it though as you have other games like Mario Strikers and Inazuma Eleven Strikers that tried to make console soccer games appeal to otakus. But with the inclusion of move-learning, the bond system, and anime-inspired action visuals, it does bring the game closer to an otaku’s heart than just another sports game.

First off, let’s talk about how this sports game includes not just one, but two story modes. Story mode in itself is a novelty as usually sports games are meant to be played as endless tournaments of action and strategy. It’s always all just about the gameplay and nothing else. I mean, no shade but how else would other companies be able to churn out an iteration every year? The first story mode is a staple in most anime games in that it revisits classic moments in the Captain Tsubasa series through the titular character’s middle school career, as well as acting as a (very challenging) tutorial. Each game is sandwiched with faithfully recreated cutscenes from the anime in cel-shaded 3D. This mode is challenging since your team is default, and basically only Tsubasa is your only decent character here so you might need to replay some matches. But, hey, since it’s a tutorial anyway, I consider it a good thing for the game to train you in getting good with the basics before you get spoiled with better characters.

The second story mode allows you to create your own character, and form a team with Tsubasa and many other characters you can collect to compete on an international stage. Games played let you earn some in-game currency which lets you purchase some aesthetic items to customize your team and your character. It also lets you roll in a gacha banner for friend cards. This is how you will collect new characters to join your team. What’s nice about this is that the gacha pool contains a lot of characters from the series – even units from other countries – which allows you to create your ultimate dream team. Playing with these characters in your team allows you to increase your bond with them (think FGO or Persona) – which increases their stats, unlocks special cutscenes with them, and most importantly, allows you to learn moves from them.

Taking that this is still an anime game, your characters will not just play like impersonal avatars like most other sports games. Each unit has their own special move – complete with superimposed animations when they proc. You will keep this in mind while creating your team comp as well as when fighting certain teams with specialties – making this game almost feel like an RPG. There’s also the aspect of your created character being able to learn moves from them, allowing your own character to take on any role on your team – which is a logical progression in the evolution of sports games but something other titles can’t really do since they’re “based on the real things”. Point 1 to the weebs. 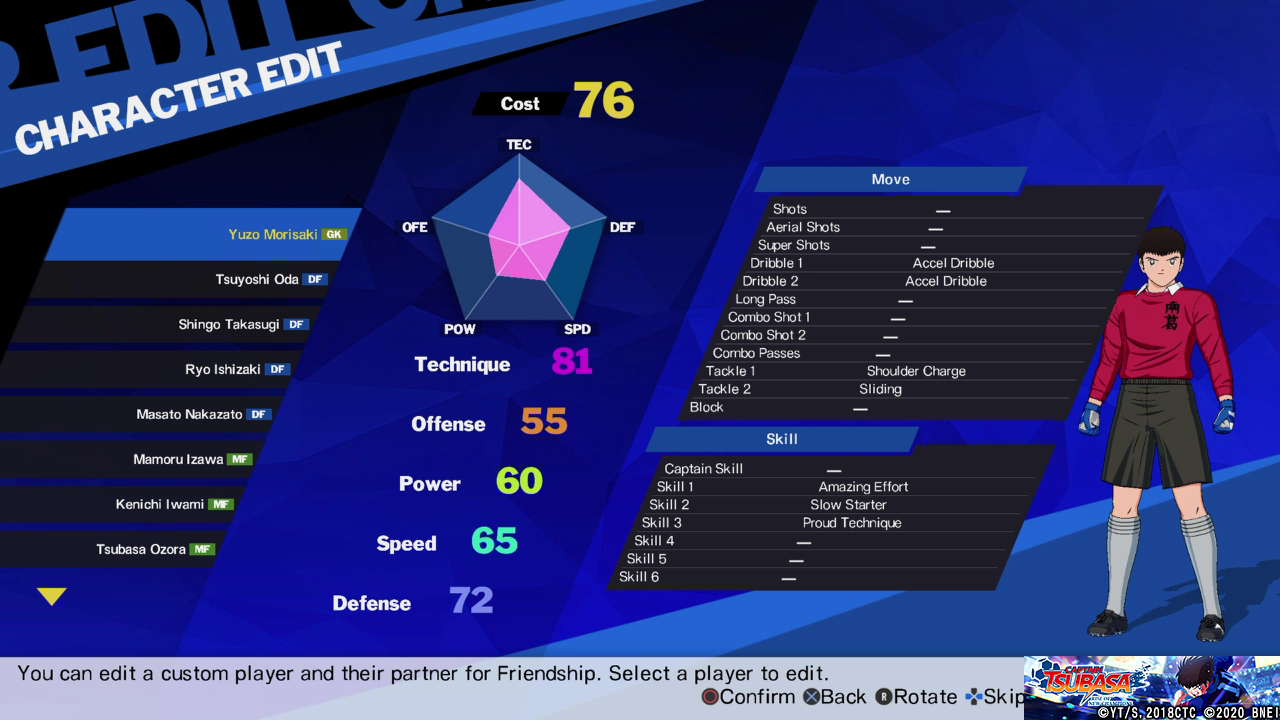 One other interesting addition to the console soccer game formula Rise of New Champions has to offer is the spirit system – which is basically the characters’ respective stamina. Utilizing spirit allows a character to perform better – run faster, block/dodge better, shoot harder. There’s even a spirit frenzy – where for a short duration on the player’s trigger, your characters will perform on max spirit. The tradeoff is that once a character is low on spirit, his performance will start to dwindle – making the game strategic timings of spirit usage. It may be annoying at first since this means that you would have to keep shooting to weaken the enemy goalkeeper before you can even begin to have a chance at getting some points in. This also means that you have to find a way to constantly get the ball across the field, chipping at your enemy’s spirit while managing your own. Each match is going to be long and grindy, ending with the winning team only having like 1 or 2 points. Which is basically what soccer is anyway – just explained in otaku terms.

But isn’t that the beauty of the game, really? Bamco took something that most otakus or gamers wouldn’t likely pay attention to (sports, in this case), and repackaged and presented it in a way that they can digest and – more importantly – appreciate. I myself am not a big fan of sports games as I find them too mechanical and mirroring of real life, but with Captain Tsubasa’s bond mechanics, move learning, the anime visuals, and the anime action –  I found myself engrossed in the game, giving it more time than I initially thought I would.

It’s still a typical soccer arcade game, mind you, so FIFA and PES fans won’t be feeling left out just because of the anime dress up. And since those games keep getting delayed, they might even give Captain Tsubasa a shot. And who knows, this may actually be the start of the bridge between otakus and the “normies”. As it opened up my world on getting to appreciate sports games, I, for one, would love to see other sports anime like Haikyu, Slam Dunk, or Prince of Tennis get similar treatment. 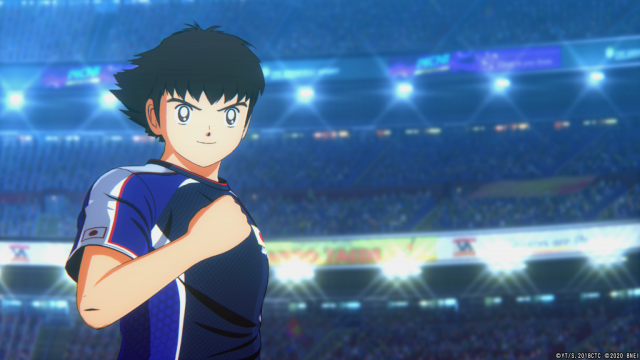 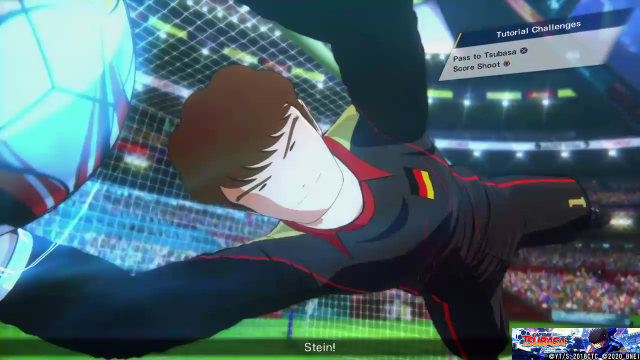 Graphics
80
Gameplay
80
Controls
75
Replayability
80
Story
80
Reader Rating1 Vote
24
DA Good
In-battle cinematics make gameplay feel like a remastered anime
It's the classic FIFA formula with a lot of much needed QOL updates
DA Bad
Each match is a long and tedious grind
Leveling up bonds, stats, and farming skills is a large hump to get over
79