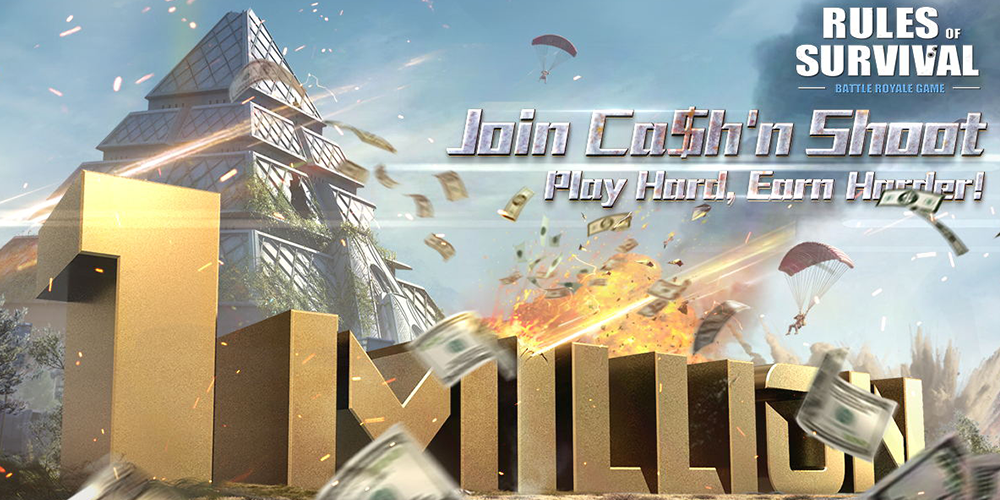 Ca$h’n Shoot: Rules of Survival Hosts a Carnival with One Million Cash for You to Take Home

Do you think a normal battle royale game is tense? Imagine how tense the action would be if all the match points you earned could be turned into cash. That’s what NetEase is planning for November 26th with its popular battle royale game Rules of Survival, which has won international popularity with more than 230 million downloads and is celebrating its 1-year anniversary celebration with revolutionary updates and unprecedented discounts. The game is launching Ca$h’n Shoot Event whereby players will fight in the battlefield for cash prize out of 1,000,000 usd award pool. Rules of Survival is taking this celebration from game-world to the real world!

The Ca$h’n Shoot carnival is set in Ghillie Island in Asia server on mobile and players can participate using Solo Mode. In the latest updated version, weekly competitions are opened for players to join. By the end of every week, the first 10,000 players on the ranking board are awarded proportionally with Gold Bullion, which functions like in-game diamonds and can be exchanged for real-life money when accumulated to a certain amount.

It’s reported that in August of this year, Southeast Asian Games Federation has agreed to include e-sports in the 30th Southeast Asian Games, which will be hosted in the Philliphines late next year. E-Sports are also looking to be included in the 2024 Olympic Games. Netease has always been dedicated to promoting the development of e-Sports, from World Championship Series events, Rules of Survival Global Series, to competitions hosted locally in Southeast Asian cities and communities, Netease aims at bringing e-sports to the everyday life of the mass population; the Ca$h’n Shoot carnival is Netease‘s latest attempt at furthering this goal.

Rules of Survival officially released for download on the 17th of November, 2017. It is the first battle royale mobile game that allows as many as 300 gamers to fight for victory on the same battlefield. The game has ranked on the top of the chart in 61 countries and districts with more than 230 million downloads in one year. Rules of Survival is available on mobiles, PCs and Steam.