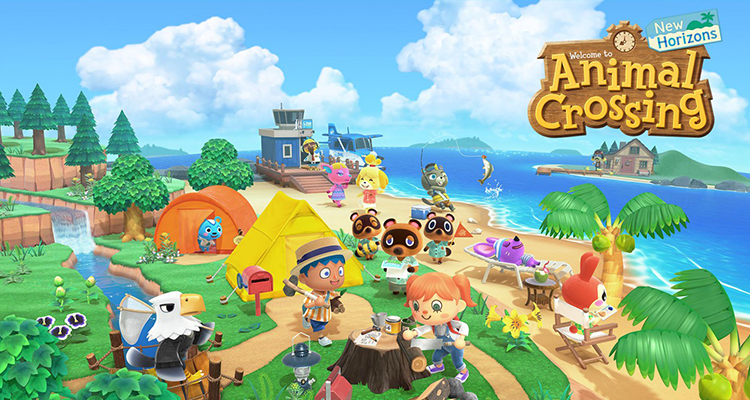 Animal Crossing, One of Nintendo‘s hidden gems, has been a part of the family for about 19 years, since it first appeared on the Nintendo 64, making its way to Gamecube, then the DS, 3DS, and lastly the Nintendo Switch. The Premise of the game is very simple, each player is a resident in a little town of anthropomorphic animals. The goal of the game, well there isn’t really. Players are free to design their homes, maintain the village, go fishing, bug catching, gardening, all for their own desires, nothing else.

Want to build a home filled with Skulls? go for it.

Animal Crossing: New Horizons follows this same formula with a few changes such as being able to place furniture outside your home, starting the village from scratch, and even terraforming the island to fit your desired look. Though there has been a multiplayer feature in the previous games, there has been a bigger emphasis on friends and playing together with each other, and building a community as well.

I’ve only played the game for about 2-3 weeks now, And have been having a blast. Building waterfalls, cliffs, ramps, and bridges opens the game to your creativity. One of our community members is building an island centerpiece around a statue they bought at one of our community auctions (more on this later). I personally am trying to build a gameboard on my island so that when friends visit we can have fun being the game pieces It’s not yet done, mostly because I’ve been getting sidetracked with the other features like buying artworks for the auctions, digging up fossils, fishing, bug catching, or even just shopping on other islands.

On my first day, I started off with a bare island, of weeds, apple trees, and rocks, with some rivers dividing the island into 3 different pieces. You enter the island under the Island getaway package that Tom Nook offered, which will be paid back via Nook Miles. But you aren’t the only one to avail of this deal, along with you are 2 other villagers, which will be randomly selected. I got Mira, a yellow rabbit, and Dom, a muscle-brained ram. The first order of business is to set up yours, and your fellow villagers’ tents. After which a celebration will be had. This will also be where villagers get to “suggest” names for their island. The Next day Tom Nook teaches you how to craft items, which you use to make your first set of tools starting with the fishing rod. As you progress through building your town and paying off your debts, you’ll get more access to the rest of the game like the Museum, Nook’s Cranny, Able Sisters‘ shop, bridges, inclines, and of course expanding the interior of your house.

Personally what sets this game apart from its predecessors is the features added to multiplayer. Players can now much more easily, give gifts, play self-made mini-games, or just enjoy each other’s company as they talk about how their day is going. We at DAGeeks have our own growing community on discord where we’re meeting every Saturday for Catalog day where we share with each other the items we have found, and maybe cosplay, and have a few rounds of hide n’ seek, or some fishing tourneys.

One of the recent things we just did was hold an artwork auction. I brought in 3 works of art. I tried to RP as an auctioneer, trying to imitate their fast speak. I failed, but that doesn’t mean the whole event wasn’t a success. It started off pretty calm at the 10,000 bells range, then it just escalated quickly when one of them added another digit, raising the bid price to 500,000 bells. Long story short, what was expected to be a game with little profit in the 40,000 range, turned into millions. the first artwork sold for 1.52 million, the second sold for 4.1 million while the last one was sold for 12 million bells, which is now sitting as an island centerpiece with a sign showing off how much was spent on it. Was it too much? yeah, but was it fun? heck yeah, and we’re planning when and where the second one will be held.

Another difference from previous games is the addition of Nook Miles, the loyalty points program where players can earn points by doing different activities like fishing, pulling weeds, planting trees/flowers, and more. These points can be used to purchase exclusive items like the Nook Miles Ticket.  The ticket lets players visit random island filled with trees, rocks, fishes, and sometimes villagers if you have an open lot that hasn’t been purchased yet. This makes for more control in which animals become your villagers. rather than just random ones just building a home like in previous games.

Because the game has no actual ending, the game can actually be updated multiple times as the years go by with clothes, furniture, maybe villagers, and flowers as well. Personally I hope they let visitors, or the very least, best friends have the ability to help edit an island. I also hope they add items that can be played with, like balls where players can dribble them, I think it would make for more fun game modes.