It’s been 12 years since the last mainline entry in the Ace Combat series hit store shelves. In the time between then and this year’s release of Ace Combat 7: Skies Unknown, we’ve had a foray into a real-world setting (Assault Horizon) and a free-to-play outing (Infinity), but none have ever really scratched that itch to hop into a fighter plane and blow stuff up, until now.

The Ace Combat series sits comfortably between arcade shoot-’em’-up and flight sim, with a generous helping of melodrama, realistic military hardware, and some near-future sci-fi. It’s a weird mix, but it’s one that helped the series earn its most ardent fans and endure through the decades. Skies Unknown continues this tradition, all while adding neat little elements to keep things fresh, making it both rewarding to longtime fans, and compelling to those coming into the series for the first time. 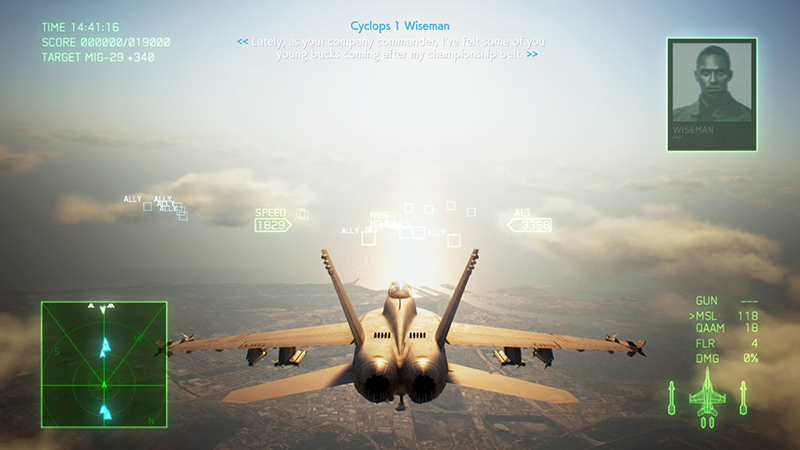 On firing up Ace Combat 7 for the first time, hop right into the options and set your controls to Expert mode. It’s a deceptive name, as it should be the game’s control scheme and not the “normal” option that you’re saddled with at the start. By not setting controls to their rightful place, you’re also cutting yourself off from more intricate moves like rolls, sharper turns, and post-stall maneuvers, all of which, are of great help in surviving the campaign’s higher difficulty levels and multiplayer.

Ace Combat 7’s story takes us back to Strangereal, the alternate Earth the series has largely used as its setting, except for that one time in Assault Horizon. You’ll be in the boots and flight suit of a faceless, silent pilot known as Trigger, and through a mix abysmal circumstances, find yourself as part of a squadron made up of convicts. The game’s plot plays out in two parallel perspectives: one from your time as Trigger, and the other through cutscenes narrated by Avril, a pilot/mechanic also known as the Scrap Queen. The former presents its events through briefings, in-mission events, and radio banter and the latter through CG cutscenes between missions. It might seem a little jarring for series newcomers, but it doesn’t take long before everything falls into place. Keep your eyes peeled to references and callbacks to previous games for eagle-eyed longtime series fans. You don’t need to have played the earlier ones to enjoy the story, but it’s a neat little bonus for people who’ve been keeping track.

The single-player campaign has 20 missions, all of which are replayable the moment you complete them. There’s a good mix of objectives ranging from simply blowing up targets to defending installations and flying at low altitudes to avoid radar detection. Success in these missions depends on choosing the right loadout before takeoff, because while there’s some wiggle room for sub-optimal setups, you can earn better ranks by getting through them in the quickest and most efficient way possible. That’s where the aircraft tree comes in. As you make your way through the campaign and continue to take on other human pilots in multiplayer, you’ll earn an in-game currency for unlocking various planes and parts, with the more recent, top-tier stuff coming in further down the tree at pretty steep prices. Luckily, saving up for something like an F-22 doesn’t take too long and you’ll usually have enough to unlock it after a few mission replays and multiplayer skirmishes.

The aircraft selection is a mix of old and new, with some completely fictional fighters thrown into the mix. You’ll be starting out with classics like the MiG-21, A-10, and F-14 to modern ones like the aforementioned F-22 and F-35. Each plane comes with its own arsenal of special weapons to unlock ranging from multi-target missiles to more sci-fi leaning stuff like lasers and railguns. The drive to unlock every single plane and component will have you replaying missions, if not doing complete runs of the entire campaign just to unlock a specific branch of the tree. There will come a point where you’ll be taking a super-advanced fighter into a sortie with your squad of jailbirds and it’ll be as awesome as it is ridiculous to see yourself at the controls of something so out of place for story purposes.

New to the series is a weather system which significantly affects how you fly in certain missions. Strong gusts of wind become an entirely new factor that you have to fight against when they come into play. Your plane can also be struck by lightning, causing your altitude to dip and your HUD to wildly glitch out for a few moments. And finally, clouds will now mess up missile guidance and making it easier for you to evade enemy fire, though do keep in mind that it applies to your own targeting, too.

Multiplayer feels like an afterthought, but a surprisingly solid one at that. You’ve got your free-for-all (called Battle Royale here) and team deathmatches… and that’s pretty much it. Going into multiplayer with not much unlocked in terms of aircraft and parts may seem like a death wish, but luckily, there are measures to level the playing field when setting up matches. Beyond that, there’s not much else outside of the opportunity to take to the skies and shoot down other human players. It doesn’t overstay its welcome, and is a nice break from replaying the campaign missions every now and then.

I can’t wrap this up without mentioning that Ace Combat 7 is also the first game in the series to by powered by the Unreal Engine. It shows, especially in how lovingly detailed the game’s playable aircraft look. Missile trails will streak across the sky and if you happen to have a good pair of headphones on, the game sounds as great as it looks. There’s a teeny bit of pop-in on some environments, but it’s not too much of an issue when you’re too busy trying to keep yourself in the air.

Ace Combat is truly back with the release of Skies Unknown, and I hope it does well enough so we don’t have to wait another decade for the next entry.