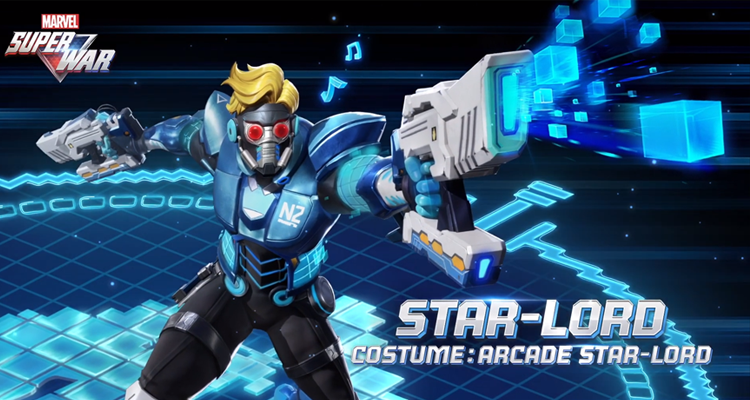 From May 21 until June 3, 2020, players can enjoy a 30% off discount on your Arcade Star-Lord purchase. The release of Arcade Star-Lord finalized Marvel Super War‘s very first original skin series. At last, the Arcade series is fully assembled.

The Arcade Series, Marvel Super War‘s very first skin series, stars the members of the Guardians of the Galaxy and tells the tale of their unusual adventure into Arcade World following a weapon testing accident. They transform into arcade game characters in Arcade World, and their goal is to beat the game.

The newly released Arcade Star-Lord skin continues the pixelated style of the series: The design features bright metallic blue as his outfit’s primary color and gives the retro treatment to the design of his iconic Elemental Blasters and trusty Walkman. The sparkling pixel halo around him also serves to showcase Star-Lord‘s mischievous and carefree demeanor.

Along with the launch of Arcade Star-Lord, Marvel Super War is also hosting a grand in-game Arcade Festival event with all manner of goodies up for grabs. Players who log into the game before June 4, 2020 receive event items that can be used to redeem a random skin chest. They can also claim a limited Arcade Festival avatar frame for free.