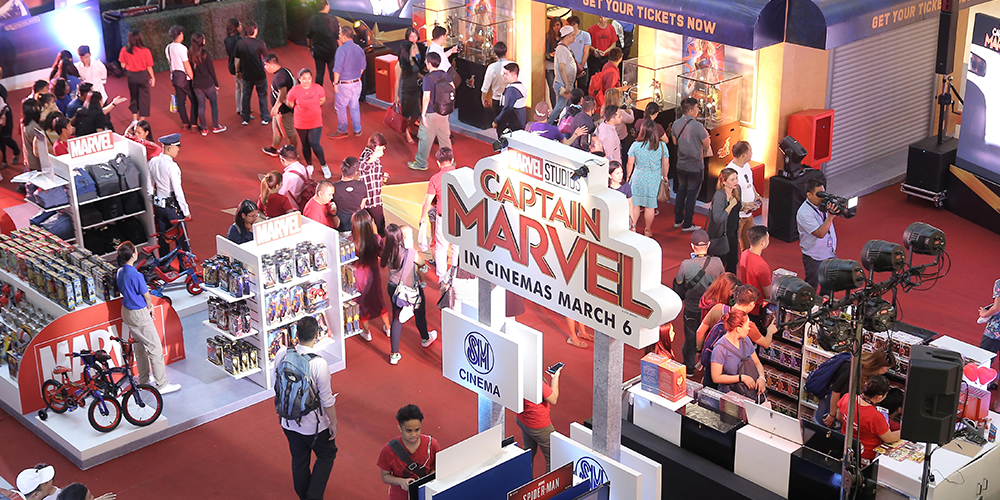 SM Cinema recently launched the Captain Marvel Fan Experience at the SM City North EDSA – The Block Atrium. Marvel fans got a chance to crash-land to the world of Captain Marvel in an interactive exhibit to celebrate the movie’s release in the Philippines.

SM Cinema put together exciting activities for mall-goers and fans alike! Walk through the asymmetrical entrance archs of the exhibit, featuring larger-than-life displays of Carol Danvers, her famous jetfighter, and her trusty sidekick Goose the cat. A few steps in and fans will be pumped up to see an incredible array of toy displays from Hot Toys and Filbar’s that will ignite the Captain Marvel fan in everyone. Highlighted in the exhibit is Captain Marvel’s personal gallery and the 180° photobooth where everyone got to show the Captain Marvel in them. At the heart of SM Cinema’s exhibit is Captain Marvel’s famous emblem, which fired up everyone’s anticipation for Marvel Studios’ latest superhero origin film. Finally, cap off the Captain Marvel Fan Experience by taking home premium memorabilia from Toy Kingdom and The SM Store.

The festivities are not yet over! Get the full Captain Marvel Fan Experience on March 12 to 27 at SM City San Lazaro.

Catch Marvel Studios’ Captain Marvel at SM Cinema, SM Cinema IMAX, and Director’s Club Cinema branches nationwide. Skip the lines and get the best seats in the house by getting your tickets here the SM Cinema App. Don’t miss the latest digital promos and online activities by subscribing to SM Cinema on Facebook and Twitter and Instagram.