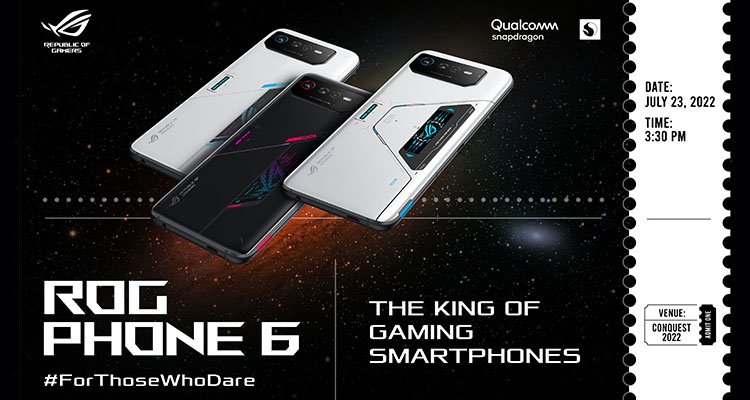 ASUS Republic of Gamers (ROG) has announced that the unveiling of ROG Phone 6 this coming Saturday at CONQuest Festival.

The unveiling is set for 3:30 P.M. at CONQuest Festival which is going to be held at SMX Convention Center, Pasay City and livestreamed at the ROG Philippines Facebook Page.

The ROG Phone 6 is equipped with the Snapdragon 8+ Gen 1 Mobile Platform with up to 3.2 GHz CPU clock speeds up to 18 GB of LPDDR5 RAM, and up to 512 GB of storage. The phone also features the novel 360° CPU cooling technology with the upgraded GameCool 6. The phone is also carrying a whopping 6000 mAh battery capacity. Visuals wise, the display’s 6.78-inch Samsung AMOLED HDR10+.

It also has a 165 Hz refresh rate. ASUS ROG touts a 720 Hz touch-sampling rate and 23 ms ultra-low touch latency. This new series comes with an array of exclusive ROG Phone 6 accessories, including the new AeroActive Cooler 6.

Get to experience the smartphone in the ASUS Republic of Gamers Booth at the CONQuest Festival event. Fans can also expect to see ROG Heroes Kiyo and Ann Mateo, as well as esports shoutcasters Manjean Faldas and Leo Gaming for an exclusive meet-and-greet on July 23, 5:00 PM onwards.

To get live updates on the ROG Phone 6 and its local availability. You can RSVP to the official event local launch page.

How excited are you to know more about the phone? Will you be getting one at release? We’d love to hear your thoughts!