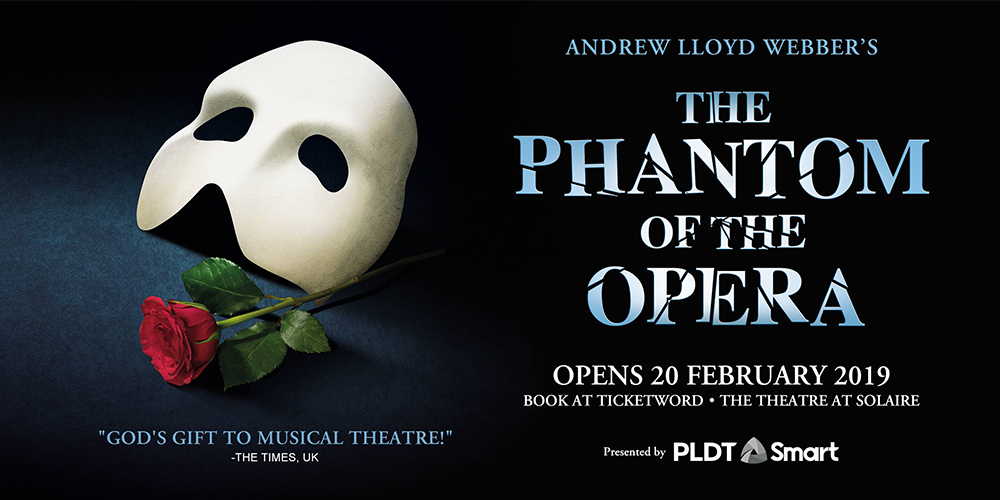 Phantom of the Opera Manila

I had the chance to witness the spectacular and multi-awarded musical of Andrew Lloyd Webber, The Phantom of the Opera, fairly recently. As expected, it was as majestic and as artistic as I had hoped for in a Broadway production. Most certainly, it was tried-and-tested formula, and – honestly – to “review” a masterpiece that had already cemented its name numerous times would be kind of off-putting. Trust, though, that the production did deserve its seat with the other musical classics. With that said, instead of a “review”, this article will be all about experiencing The Phantom of the Opera live.

Before I get into the entire rave, let me present a short recap of the story and its history. Simply put, it revolved around the Opera Ghost’s (Phantom) obsession over Christine Daaé, a budding actress whose voice the Phantom adored and tutored. This masterpiece was first a novel written by French writer, Gaston Leroux, in 1911. Andrew Lloyd Webber, later on made the book, Le Fantôme de l’Opéra, into a full-blown libretto together with lyricists, Charles Hart and Sir Richard Stilgoe. The musical premiered in West End 1986. It then ventured to Broadway in 1988 and won a handful of awards.

Like many, my first encounter with The Phantom of the Opera was during the 2004 musical film adaptation. It starred Gerard Butler as the Phantom and Emmy Rossum as Christine Daaé. Personally, I found okay – in the most basic sense of the word. It was not until later on that I gained some sort of appreciation, when I stumbled upon some clips on YouTube. The staging had no film magic, which the movie obviously had the advantage of. However, I could not help but wonder how everything happened on the stage, and in proscenium. I also wanted to feel the music move me – videos already did as far as they could. What more if I had heard the libretto in person, right?

Having to pay an arm and a leg and seeing the musical in actual was certainly more than the word “amazing” can contain.  It was a rare moment for me – in fact – to forget that I was curious about the science behind the entire production. Instead, I found myself genuinely enjoying the masterpiece unfold before me and relaxed in my seat. How could I not? Despite the emotional impact the story could blow, for the first time – I was thoroughly happy and quite entranced. Especially with the famous chandelier.

Yes, the chandelier, which had become the centerpiece of the production. I could have sworn I felt a lump in my throat at the time of the reveal. Once it went up and transitioned into the world at the time of the Phantom, I was reminded of what I aspired to be a part of in my college and early post-graduation life. Maria Björnson was definitely a master of her craft and anyone in the audience would be so blessed to see her designs moving in real time.

In combination of the craftsmanship on-stage, was a powerful and endearing line-up of actors. Perhaps one of the best names to headline the renowned musical.  They all brought personalities and voices to their respective characters, which consequently also gained the sympathy and response of the audience. Professionally, they all seemed so versatile and well trained that any mishap on-stage was unnoticed – if there were. Moreover, any theatregoer of both local and international scene could definitely differentiate the studies and disciplines between the two theatre cultures. It should be said, however, that each theatre culture was unique and there was no right or wrong – just differences.

Of course, what tied the two elements above were the libretto and the direction, both of which breathed life into the production. Webber was a genius – without a doubt. The music, which accompanied the story, was interlaced in the dialogue. It was a move that made it easier to understand and catch on with the thick of things, despite the fast-paced and abridged storytelling of the original novel. On the other hand, Harold Prince’s choice of direction was as expected from a multi-awarded director as well. The movements on-stage was one thing to applaud; however, anyone who observed just enough should have found other layers of plot points that tied the entire story together.

In the end, The Phantom of the Opera is proof that magic existed. The musical’s overall production, charming cast, as well as heart-wrenching libretto and direction came together with a mission to bring us – its audiences – into another world. Opting to watch it through the screen, while still fine, would definitely be a cop-out on the entire experience. The Phantom of the Opera conveyed emotions I never knew I needed to feel – yes, this is a difficult statement to understand. Which would be why it would be best to advice catching it while it is still on-stage in order to comprehend the immensity the idea.

The Phantom of the Opera is currently still on at The Theatre at Solaire until April 6. Tickets are at https://www.ticketworld.com.ph/.

Also, there is hopeful news for fans of the franchise – it looks like they will be bringing in Webber’s sequel to The Phantom of the Opera, Love Never Dies. So stay tuned for the news and be sure save-up your money, theatre geeks!