One of the things we’ve been having trouble with with the DC Deck-Building game from Cryptozoic Entertainment is how to carry everything else if you have kept your copy updated with it’s four full standalone games, three Crisis cooperative expansions, as well as the four Crossover Packs.

Oh, and the Cryptozoic is also in the process of creating two more expansion packs.

Well Cryptozoic seems to be providing an answer for our storage problem with their announcement of the DC Deck-Building Multiverse Box.

Yes, that’s right, the above header image I used is NOT the final look of the box, but the idea behind the multiverse box is to provide a box that players can “store everything in it”.

At its heart, the DC Deck-Building Game Multiverse Box is a place to store and organize your entire collection of DC Deck-Building Game cards, so they are all easily accessible in one place. When you open the box, you will find three channels that are divided by two protective walls. Each channel has two pieces of form-fitted foam that can be used to hold your cards snuggly in place, so that any jostling will not knock your well-organized cards around. If you sleeve your cards, you’ll have nothing to worry about, as standard sleeves fit in the organizer. Lastly, 20 tabs for all sets through Crossover Pack for Birds of Prey (coming out later in 2017) come with the Multiverse Box, allowing you to find the set/expansion you need quickly.

But what’s more, the multiverse box is not just a carrying solution for the game, but will also contain an exclusive Multiverse Crossover Pack in the box that utilizes ALL of the cards in your collection, no matter how many releases you own. So basically, those who will get the box will get 33 more cards.

The post teased three super-villain cards in the pack which are namely: Brainiac, Telos and Deimos. Here’s the sample of their powers (the card arts, we were told is subject to licensor approval, similar to the box design up there) 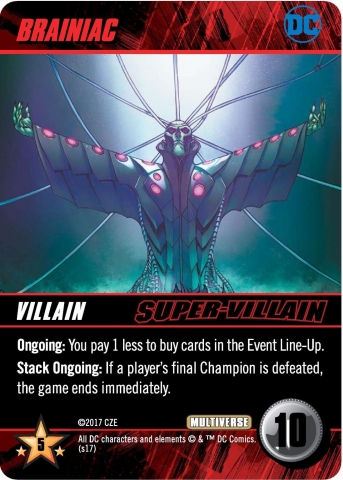 The box is expected to be available in the middle of the year priced at 25 USD, basically around 1,250 PHP. To know more, you can head to the Cryptozoic Entertainment fanpage.