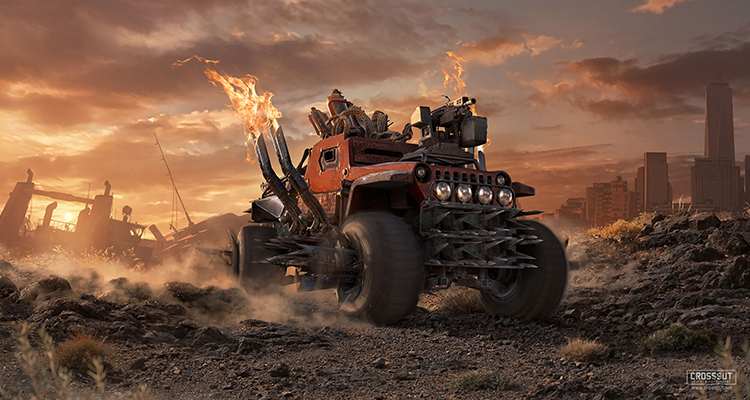 PlayPark has announced that the the highly anticipated (at least for me) post-apocalyptic vehicle game, Crossout is now out and is officially launched.

Developed by Targem Games and co-published by Gaijin Entertainment and PlayPark Inc. the game is a mix of gather and build mechanics from MMOS and the fast-paced gameplay of vehicle shooters.

The game’s setting is as follows:

Crossout is set in the post-apocalyptic Wastelands, a lawless valley where survivors live by three words: Craft, ride, destroy. Players have to scavenge resources from missions in order to build guns and parts for their unique vehicles. There are many combinations for parts from tank threads to guns to armor that will allow you to build the ultimate war machine to blaze your way to victory.

The launch of Crossout also brought a big patch will feature improvements to overall gameplay, the Personal Playground area, and a battle pass system for the new season, Doomsday Cars. The Personal Playground will include interactive upgrades to your garage while the battle pass system is a paid account upgrade that will give players bigger and better rewards for completing specific challenges. The battle pass system also has unique items and skins that can be unlocked by ranking up the pass, allowing players to improve and customize their war machines.

While these features will be available to all players regardless of play modes, PlayPark Inc. has not forgotten the competitive aspect of the game. With official esports partners Mineski, TNC, WomboXCombo, and CollabAsia, Crossout is set to be the newest esports title to excite both professional players and fans in Southeast Asia. Watch out for local and regional online tournaments from Crossout and PlayPark Inc.!

On the livestreaming front, the game has partnered with Peenoise Realm for content-packed with gameplay, memes, and fun. But it doesn’t stop there. Crossout is still on the lookout for streamers and content creators to share this adrenaline-fueled game to their audiences. For those who wish to sign up, send a DM to the PlayPark Crossout Facebook Page.