Since it first aired, Gintama has always been an action anime that prioritizes really running away with its  jokes than its action. It still is a serious shounen action title that has its somber and emotional scenes, but it has made a name for itself with its numerous gags and parodies. So it may seem weird but totally expected that most Gintama video games are also just token spin-offs of the animation alone, such as that ladder snake game and a life simulator.

Being the first anime game of 2018 is a big deal as the year promises to be an otaku gamer’s dream with big releases around every corner – like Knights of Britannia, Granblue Fantasy Re:Link, several Nicalis titles, and of course, Dragon Ball Fighter Z – with Gintama Rumble setting the tone of what 2018 is going to be like.

First off, let’s talk about content. As most anime titles are, Gintama Rumble is a video game reenactment of a stretch of the anime’s timeline. Rumble though covers several of the series’ most popular arcs, like the “Benizakura” Arc and “Farewell, Shinsengumi” Arc – which is a nice send-off to the anime, where you can dip your feet into the pools of nostalgia one last time and relive the series’ most iconic moments, or in my case, experience them for the very first time. There is a wide selection of playable characters, mostly fan favorites. But in the true spirit of the anime, a lot of joke characters made it in as well most in the form of assists. As an homage, there are a lot of cut-scenes and sequences from the anime. Though I am kinda disappointed that the cut-scenes are just screenshots and not the actual clips, but they do make it up with the in-game reenactments which are hyped af, and me not being a fan to begin with, got me really into it.

Gintama Rumble is a Musou game. Hack and slash through a fog of bodies to your heart’s content. It’s a grandiose display of satisfyingly widely destructive action fancied up in custom combos. Commando strings and special attacks can be cancelled into each other which can result into endless combo mayhem – something to satisfy the inner aggressor in everyone as well as finding ways to tickle your funny bone with the craziest, funniest and most random of attacks.

Like in most Musou games, once you fill up a meter, you can enter a special state called awakening, where you become stronger and gain access to a special animated finisher called Awakening Rumble. In a special Gintama flavor each of them shows a special screenshot from the anime before the finisher. It’s a nice touch, but a glaring flaw would of course be that the shots are in a 4:3 aspect ratio, which looks weird in an otherwise widescreen-set game. I can understand this since the anime has been around for quite sometime – way back before HD settings became a norm and that remastering a lot of scenes would take a lot of effort, but it just looks weird because other parts of the game that uses cut-scenes as well are in full widescreen format, so you gotta ask what gives?

One thing I like about the game is that even though this is a Musou game, there are one-on-one battles. These are usually reserved for boss battles, but it is still refreshing to fight a boss where they don’t have a billion creeps fogging in between.  And once you finish a chapter along with its achievements, you get to unlock its side story chapter which lets you play that same chapter in the perspective of a different character, giving it more depth and replay value.

Another fun thing about the gameplay is the Gintama Pachinko, which is a random roulette that appears everytime you fulfill certain conditions in battle. This will give you random effects such as attack up, full health heal, enter awakening immediately, or effects that screw you over like pixelating the entire screen for a while – funny stuff that’s in spirit of the anime. The most notable effect being transforming into a parody of Cell from Dragonball Z, named Cello. Yep, the game is overflowing with parodies like this, most notably references about Dragonball, being self-aware that their releases are only 1 week apart. 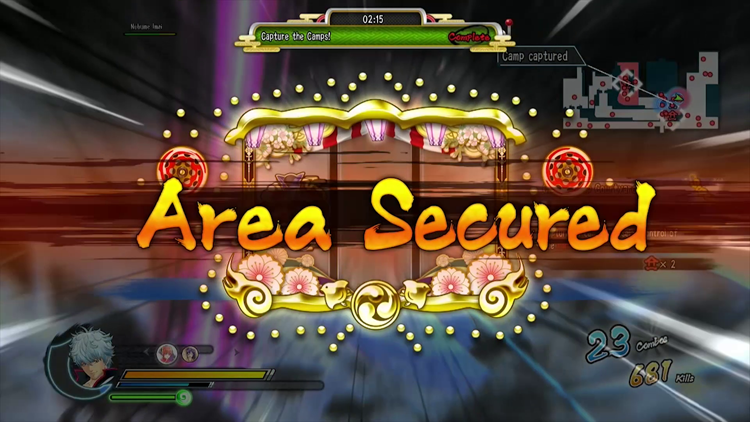 Outside of battle, you can customize your characters to an extent – changing their costumes, assigning orbs for assists, and managing their stats, affirming that this is a grind-heavy game. I have to admit that it was hard getting into the game at first as you start with the most basic of combos and noob stats, and you only level up after successfully finishing a chapter. It took me about 30 minutes to get through the first stage alone. Maybe I’m just a noob, or maybe it was really set to a slightly steep entry. The point is, the game requires some dedication to get through, because you have to work with going back to square one each time a new character is introduced. The difficulty levels scale as each chapter progresses, but new characters are always introduced at level 1. Some may like the challenge for some added replayability, some may find it a turn off. But after getting frustrated the first few hours, I realized this setup is kinda justified for you to play through everything.

Luckily enough, the game has more modes for you to play outside of story mode. You have Free Battle, which lets you replay completed chapters with any character you have already unlocked. This is where you will mostly be grinding and leveling your characters, and how you will be completing most achievements, and where you can create some dream fights that never happened in the anime. There is also a third mode called Kabukicho Ultimate Rumble. The content for this is original and exclusive to this game. The plot though is rather shallow and is more of a narrative that just justifies what you have to do: which is be the first character to gather 12 orbs by defeating bosses. First one to do so gets a wish. And yes, they are aware that it is also another Dragonball reference.

All in all, Gintama Rumble is a super fun action anime game – especially if you’re a longtime fan or one just looking to get into the series. There is a lot of fan service to keep the mood up through long hours of hacking and slashing. 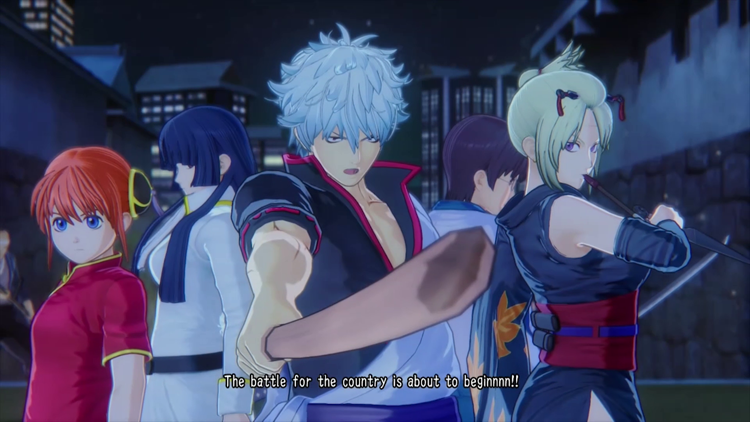 One problem I have is that it kinda gets repetitive along the way so it’s not really a game you would want to play in one long session. An hour or 2 everyday at most just to keep the lifespan going. One other thing I have a problem with is that it feels they could have gone all the way with the production of this game being a last tribute to the series, but for some reason held back. With the screenshot cut-scenes, the 4:3 inserts, the generic trophy list – it just feels like they could have done a lot more but didn’t.  But otherwise, this is probably the best looking anime game next to Fighter Z so far. It actually got me interested into seeing the anime or reading the manga for the first time. So yeah, this gets a big thumbs up from here in DAGeeks.

How do you feel about the game? leave a comment to let us know 🙂

Graphics
Gameplay
Controls
Sound
Replayability
Story
Pros
The spirit of the anime is intact
Lots of fan service and parodies
A good way into the anime, as well as a showcase of the best of it
Cons
Repetitive
Comes across as a little half assed
No online or multiplayer
3.8