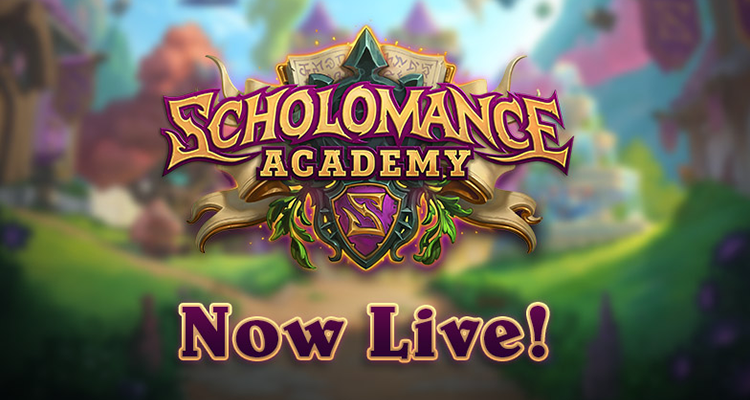 Idle undergrads and students of the arcane can celebrate the opening of Scholomance Academy, the latest expansion to Hearthstone. Players will expand their magical repertoires with 135 all-new cards designed around the prolific professors, erudite lessons, and sorcerous hijinks that define this fabled institution of higher learning.

Hearthstone players can now make use of the 40 Dual-Class cards designed around ten unique class combinations and the powerful synergies they share. Whether you’re a Druid have animal friends like a Hunter, or maybe play an Arcane trickster with Rogue and Mage cards.

Scholomance Academy brings a new mechanic called Spellburst, which triggers a one-time-only effect the next time the player casts a spell. Players can also benefit from hitting the books with new Studies cards that allow them to Discover a card immediately and also reduce the mana cost of the next card they play of that type.

“Following our reveal of this expansion last month, it was clear that the vibrant theme and new game mechanics resonated with millions of Hearthstone players around the world. We’re excited to now be able to open up Scholomance Academy and put the magic in players’ hands.”

Players will get access to 135 all-new cards that will surely aid in their pursuit of excellence. Starting today, players will receive a random Scholomance Academy Legendary
card just for logging in. For new players joining Hearthstone, a free new deck will be awarded after the completion of the tutorial and starter questline. We’ve also made it easier for returning players to claim the free deck by removing the prerequisite of completing the returning player experience. If the returning player has been away for 120 days, the player will be prompted with the deck grant right after logging in! For more information about the free deck for new and returning players,  visit the Forum Thread here.