The Dynasty Warriors series is one of the most famous among the hack & slash genre of video games since Dynasty Warriors 2. Set in the Three Kingdoms period of China, it has been a staple of the genre as one of its most signature titles. Furthermore, its core game system has been used with a variety of different intellectual properties (ex. Fist of the North Star, One Piece, etc.) and adapted into different historical settings (Samurai Warriors).

As a fan of the Romance of the Three Kingdoms, I was able to play Dynasty Warriors 2 through 7 on the PlayStation 2 initially and later on the PC platforms. It has been an enjoyable trip seeing the gradual evolution of the game until its current edition, Dynasty Warriors 9, which implements a whole new dynamic to the game – an Open World System. Along with this comes a number of other system changes, such as the weapons/equipment system changing from a stage-by-stage drop system to a crafting/drop system.

Visually, the open-world perspective is impressive, although it is noted that many other games have deeper open-world setups. Nonetheless, DW9‘s setup is serviceable and qualifies with the open-world format. A great part of the impression is simply being able to play in the particular setting of the Romance of the Three Kingdoms. The characters are also decently made, with the iconic characters having their signature DW-esque flair of pseudo-medieval Asian outfits. These are, as usual, enjoyable to see and to play in.

Music is another competent point of the game, bringing back the majestic, orchestral themes that I recall being a staple of the Dynasty Warrior games. As background music, I have no complaints with the songs, which fittingly accompany the scenes as they occur – from battle music to the cityscapes, and to the moments of riding and exploring (w/c can be a lot, if you don’t use the fast travel options).

At the heart of it all, however, is the game system. Playing this on a PC with a mouse & keyboard set up can be done, but the game genre feels more fluid with a controller. Nonetheless, the game delivers well on combat, with a wider variety of combinations, thanks to different attack sequences and multiple weapons.

Character customization is brought about by variation in gear, weapons, and bonus points which can be assigned to stats. Weapons can be customized through the reforging system, which can add triggered elemental effects and temporary stat enhancements. Crafting is taken a step further, with the player collecting resources from the field or through mission rewards. While basic items can be made from the start, more advanced ones require the player to acquire recipe scrolls. Scrolls can be found either through mission rewards or through purchases from special NPC vendors, who may require special currency which are again earned through missions. These mechanics provide the grind for the game, which is optional but may be done to acquire better gear.

The world set up allows you to explore the entirety of China, with missions depending on the scenario and the actions taken by the player as they influence the map. There are fixed story missions as well as the constantly generated missions which arise from the flow and ebb of the map’s combat. Furthermore, there are a wide variety of foes to be found in the wilderness, along with hidden caches of resources, used in the game’s crafting system. There is also the hideaway system, which lets the player customize their home. This is primarily decorative and cinematic in use, though it allows the player to have certain game mechanic conveniences.

Although I’ve yet to maximize the incredible amount of possible playtime in this game, I’m fairly pleased to have gotten this edition of Dynasty Warriors. It delivers the familiar enjoyment of hack & slash epic combat, with a wide array of characters and interactions to look forward to, both in the scenarios and with the world in general. I do look forward to additional content, however, which could really elevate the game from ‘competent’ to something greater. 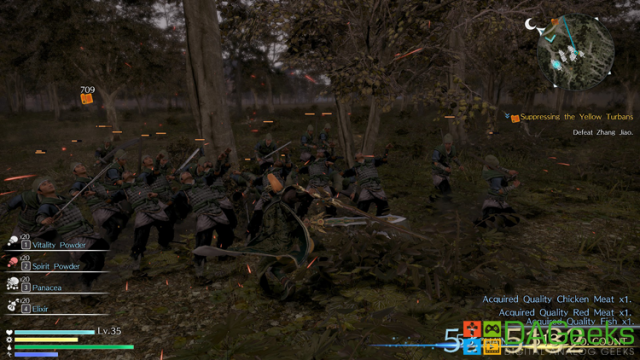 Definitely not a bad game at all, but could use more meat and polish to really make it great.
Graphics
Gameplay
Controls
Sound
Replayability
Story
Reader Rating1 Vote
The Good
Open-world setting provides a lot of exploration and interaction.
Procedural mission generation gives good "grind" and replayability.
Wide array of characters and stories.
The Bad
Ports need to be optimized to give a smoother experience.
Only moderate variability and content outside storyline missions.
Visuals and sounds could be more detailed and smoothly transitioned.
3.8