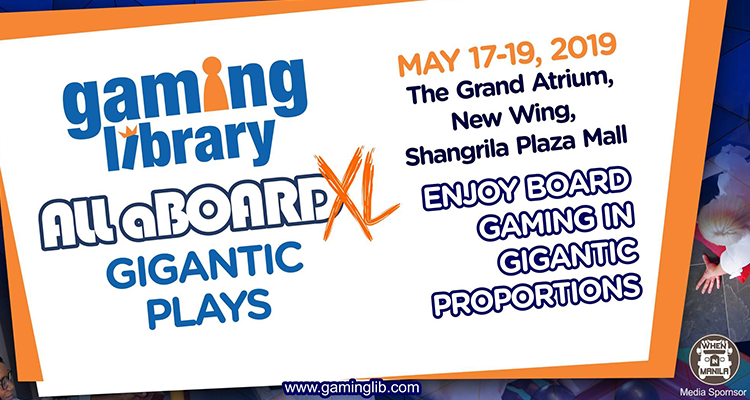 Local Board Game company Gaming Library has announced that it’s going bid for this year’s celebration of International Tabletop Day and the company’s 8th year anniversary with the upcoming All Aboard XL.

To be held starting tomorrow, May 17, 2019 up until May 19, 2019. All Aboard XL will  highlight Super sized game versions of board games such as Catan, Forbidden Island, Marrakech, and Codenames.

Other events during All Aboard XL include the ff:

For this year’s ITTD, we are taking the Philippine gaming community to a board game wonderland, We are setting a gigantic stage for gigantic plays that will hopefully inspire people to put their heads together, exceed their limits, and most of all, be receptive of what our games are capable of teaching. We want All Aboard XL to not just provide entertainment but also an opportunity for learning and knowledge-sharing.

Multi-awarded game designer Eric Lang is also coming back to the country for the event. He will have a scheduled meet and greet, and autograph signing events that will happen on May 18 – 19.  He will also have a talk about Game Design and he will also award the Ultimate Blood Rage Champion.

All Aboard XL is set to take place on May 17-18 at the East Atrium, Midlevel 2/3, East Wing of Shangri-La Plaza Mall. Tickets are FREE, just register at All Aboard XL’s event page.

Meanwhile, here’s the list of activities for the event: