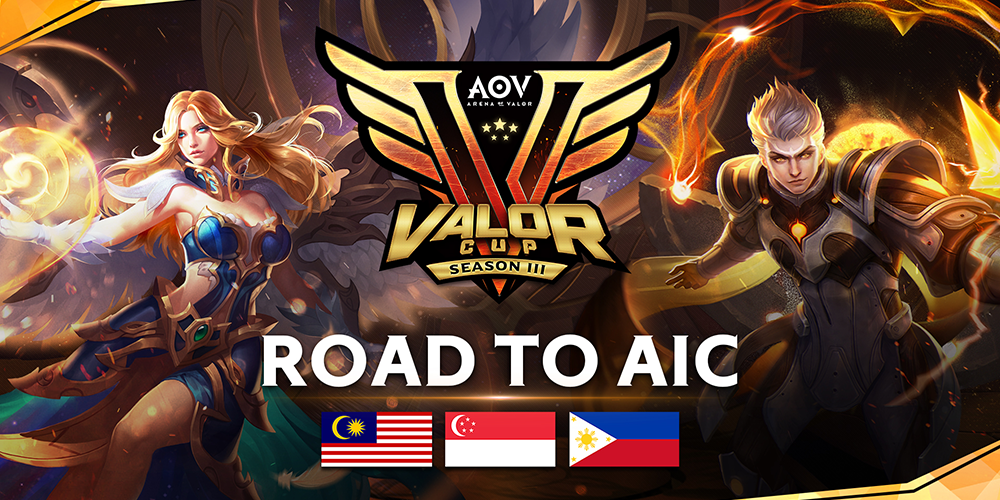 ​Garena AOV’s Valor Cup is back for its third season! This time with a prize pool of more than 1,000,000 php and a slot for one representing team to the AOV International Championship (AIC) which is set to take place in December this year.

Valor Cup Season 3 starts with online qualifiers in the Valiant Server (Malaysia, Singapore, and Philippines), leading up to an offline grand finals where the representing team to AIC will be crowned. The last of the Philippine qualifiers is this weekend September 1-2, 2018.

The top 2 teams from the qualifier will move on to the National Finals where the winners will move on to the Grand Finals and be one step closer to the Arena of Valor International Championship (AIC)! The 3 runner-up teams from each country will battle it out in the wild card round where the winner will join the other 3 qualifiers in the grand finals. Here are the special dates for the Valor Cup Season 3:

AIC is the second AOV international tournament following the success of the recently concluded Arena of Valor World Cup 2018 (AWC) in Los Angeles, USA with over 300,000 concurrent viewers. AIC is slated to be held in Southeast Asia this coming December 2018. Valor Cup Season 1 ended with Philippine Wild Card team WIL New Era (WNE) as the Champions. Meanwhile, the Philippine’s own Clutch Guild (CG) claimed the throne in Valor Cup Season 2, which was also the regional qualifier for AWC.

Valor Cup Season 3 Qualifiers will also serve as a gateway to Singtel’s PVP Esports Championship as the National Champions of the three countries will get a slot to the tournament. Garena AOV is a multiplayer online battle arena (MOBA) game and can be downloaded through the Google App Store (here) for Android users as well as through the iTunes App Store (here) for iOS users. Follow the event updates at our Garena AOV Facebook fanpage (here).